Last week in our virtual Smart Remodeling Workshop Megan Bringman shared tons of information about bathroom design and how to make the most out of each square inch of your bathroom whether it’s a small hallway bath or a large primary bath!

This small hallway bath in Leawood was ready for an update. There were too many doors when coming in, not enough room to move in the bathroom, it had some water issues, and was dated. The homeowners had a few wish list items. They wanted to update the space, and somehow bring laundry to the main floor, they also wanted to maintain a linen closet in this space. 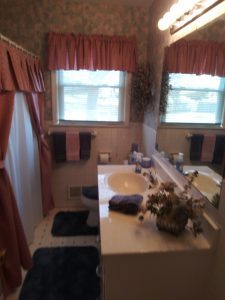 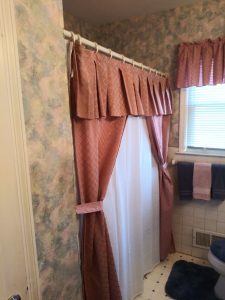 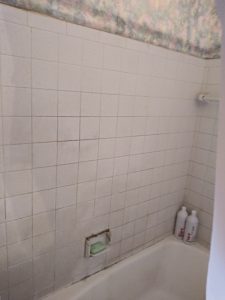 In the new bathroom, we installed a new tub/shower with an onyx surround. The new vanity is a bit narrower giving more space between the vanity and the tub. We were also able to recess a linen closet into the wall for storage. The old linen closet was converted into a stacked washer and dryer and tucked behind cabinet doors. Finally, we removed the old hinged door and added a pocket door to maximize the bathroom space and prevent another door issue. 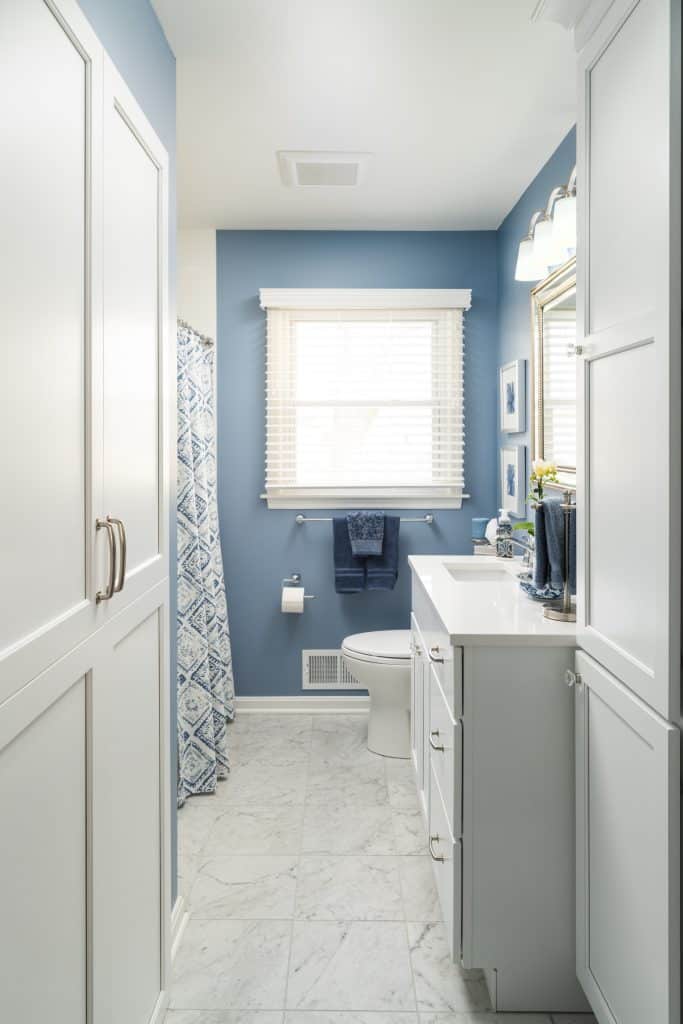 This mid-size primary bathroom had quite a few pain points for our clients. First, the contemporary design aesthetic didn’t match their more traditional home. The layout of the bathroom was awkward with one whole wall serving as a vanity and a second small vanity along across from it. There were several doors into the bathroom including one into a washroom with a toilet and bidet, which wasn’t used. 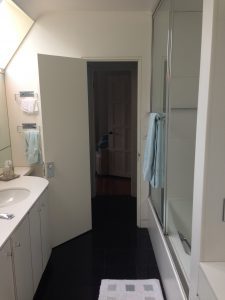 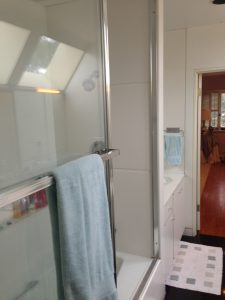 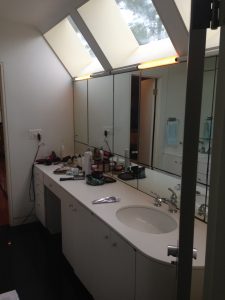 Our clients were hoping their remodel would deliver a free-standing bathtub, larger shower, and double vanity with a transitional design style.

Megan worked with our clients to create a new floor plan that would better serve their needs. She removed the old washroom and turned it into a large shower and linen storage. Removing the large vanity made space. Relocating the entry door from the bedroom cleared the wall for a new double sink vanity. 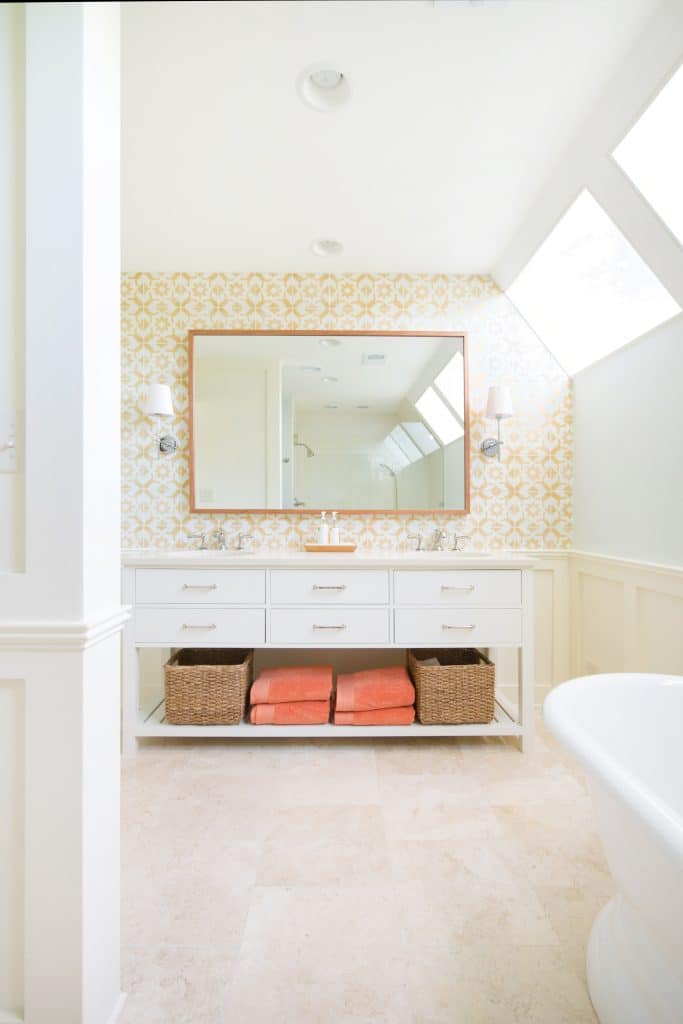 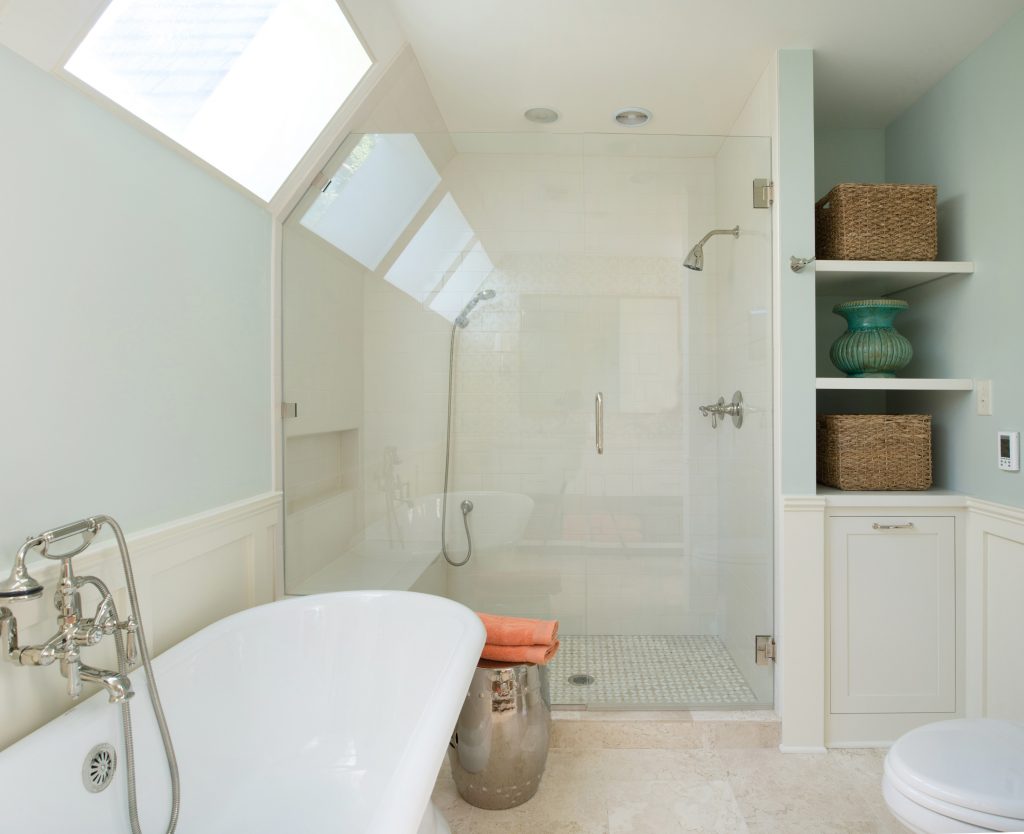 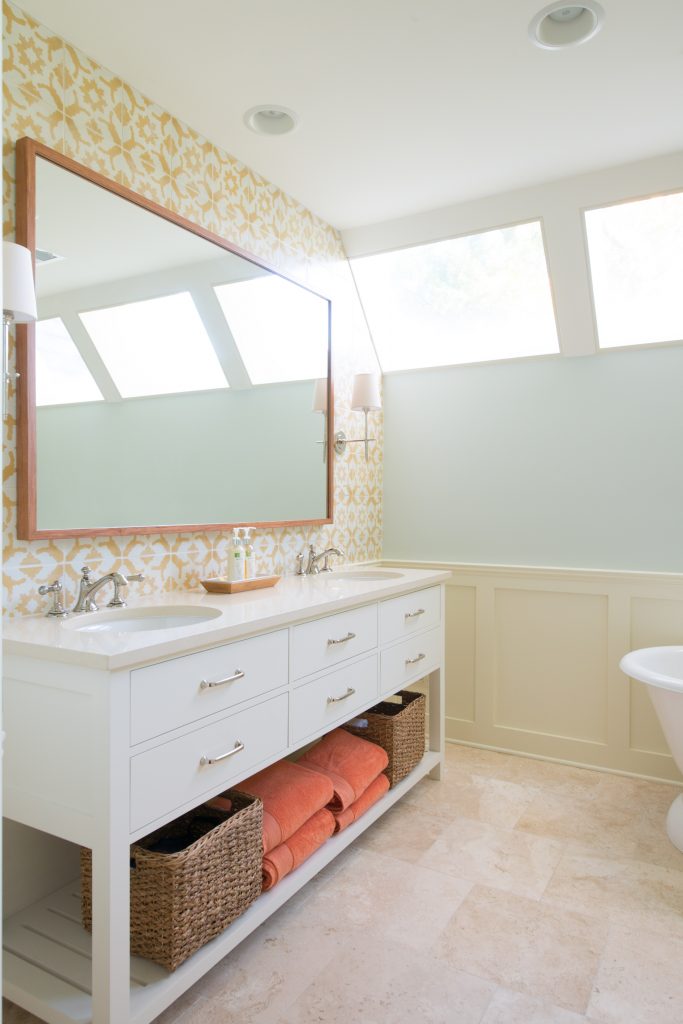 There was no lack of square footage in this large primary bathroom however storage was a different story. Our clients ended up using their countertops for storage. Additionally, for such a large room the shower was painfully small and tucked away in the washroom. So, what was using all that space? A large, unused whirlpool tub stood front and center. In addition to design flaws, the bathroom was also dated. 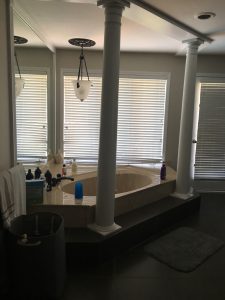 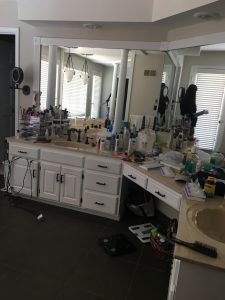 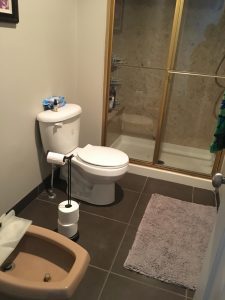 Our clients knew they wanted a luxurious, traditional style bathroom but even more important they wanted his and her vanities with plenty of storage and a large shower.

Demolishing the existing bathroom allowed room for a large shower to stand front and center. The dual-sided shower even has two entry doors. A large soaking tub will stand in front of the shower creating a focal point as well as a bit of privacy. Megan added his and her vanities on separate sides of the bathroom. Both have a countertop cabinet with plugins for appliance storage. She also added back in a small water closet providing privacy. 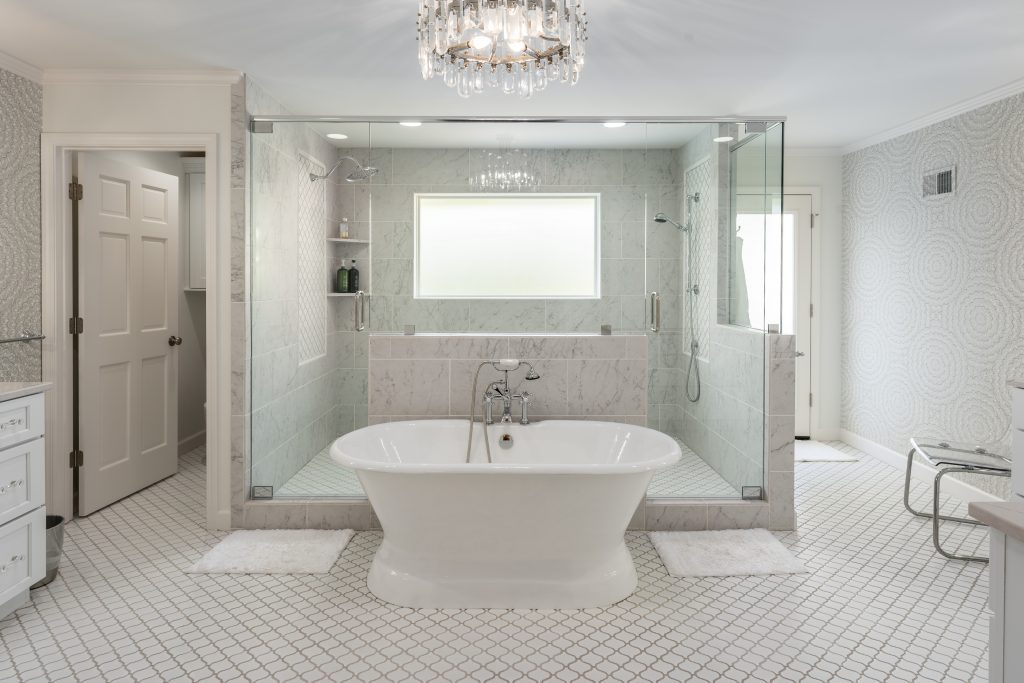 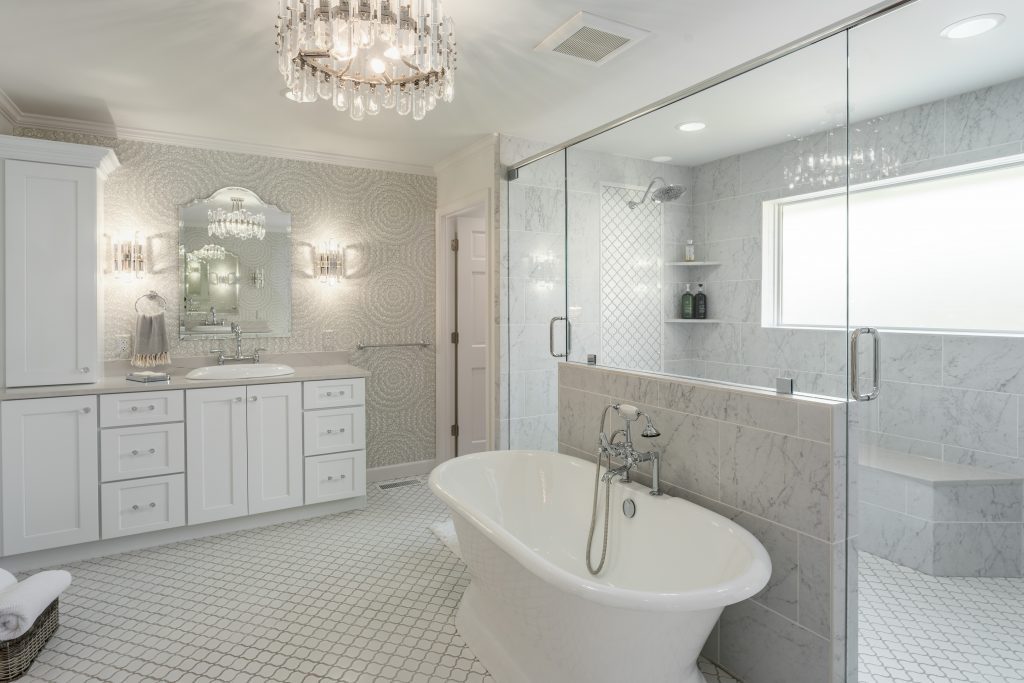 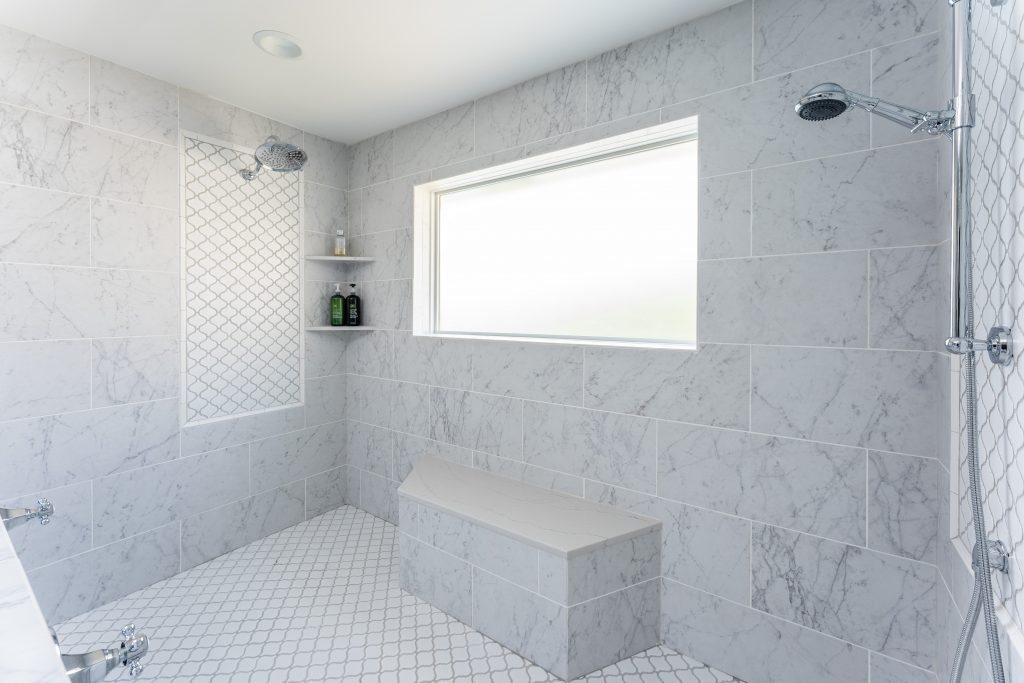 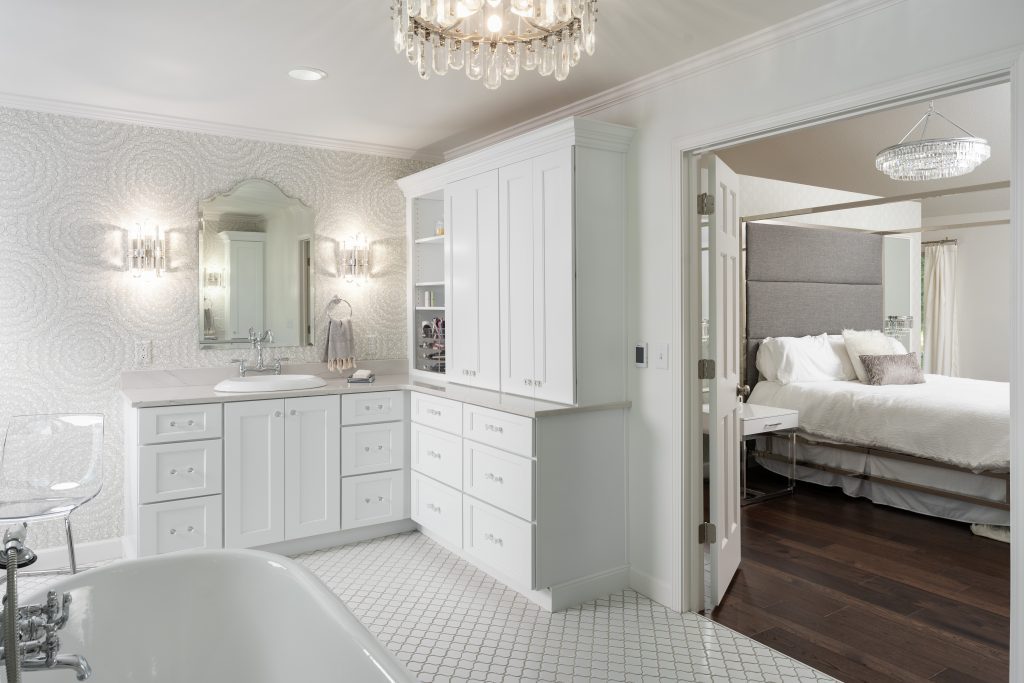 Is your bathroom design not functioning well for you? Give us a call to speak to a Schloegel expert.