With their children grown and out of the home, these homeowners found their nest to be anything but empty. As their children began to bring home spouses, they found their kitchen and dining layout wasn’t accommodating the additional adults. They started to have a serious discussion about whether to move or remodel and make their home fit their needs. Our homeowners quickly found they wouldn’t be able to find a home that met their needs in their existing Fairway neighborhood. They also loved their home and decided a remodel was their best choice.

A Cramped and Closed-Off Kitchen

When Nina Schmidt first met the homeowners, they described their space as tight and clumsy. A closed-off kitchen, cramped breakfast area, dining room, small tv room, and a bottleneck pantry were just a few of the problem areas. The spacious living room was closed off from the kitchen and therefore wasn’t often used. So, the family tended to squeeze into their tight tv room.

When asked what they wanted, open space was the resounding response from the homeowners. They wanted to create a larger kitchen. One where their family could all gather or comfortably host parties including an island with seating. Making use of their beautiful living room was also high on their list.

We created several new design options for the homeowners and then revised a couple of those until they ultimately decided on the “all-in” plan or the plan that completely opened up the small rooms and created a truly open floor plan.

We removed all walls from the existing area which was comprised of a dining room, kitchen, breakfast area, pantry, and mudroom to create one large open room. The kitchen sink remained in the same location but everything else was reoriented.

The completed kitchen turned out stunning! An open and spacious kitchen with plenty of room for guests and it perfectly captures the coastal vibes of our homeowner’s aesthetic. Nina’s keen eye for design shines through and Keith Brockman and his team blew it out of the park in constructing the kitchen! 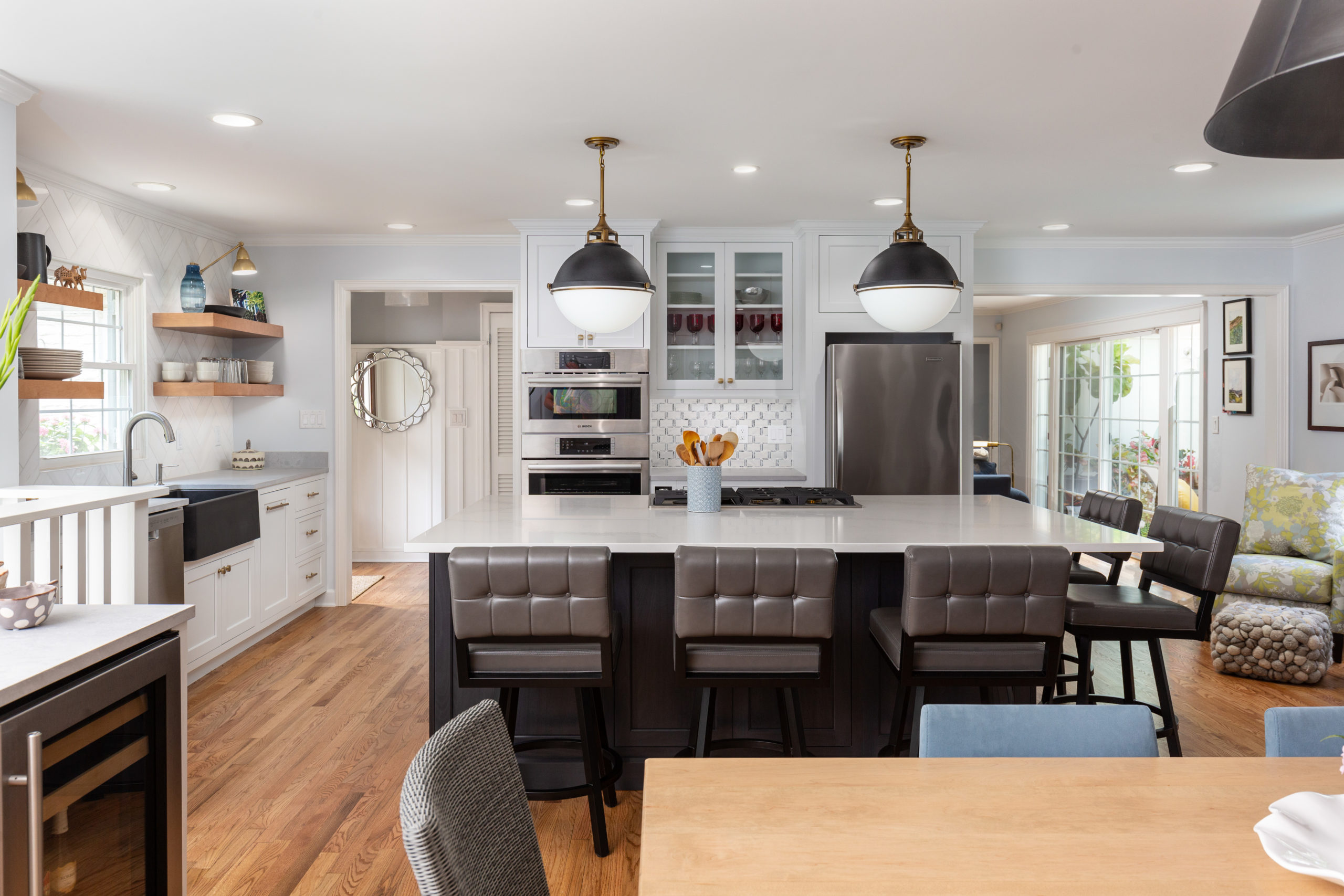 In the existing kitchen, the homeowner had removed the doors off of the old wall cabinets and wanted to keep that open look for her dishes. So, we added floating shelves on either side of the window above the sink supported by custom hidden brackets. A beautiful full-height chevron marble backsplash really sets off the space and draws the eye up. 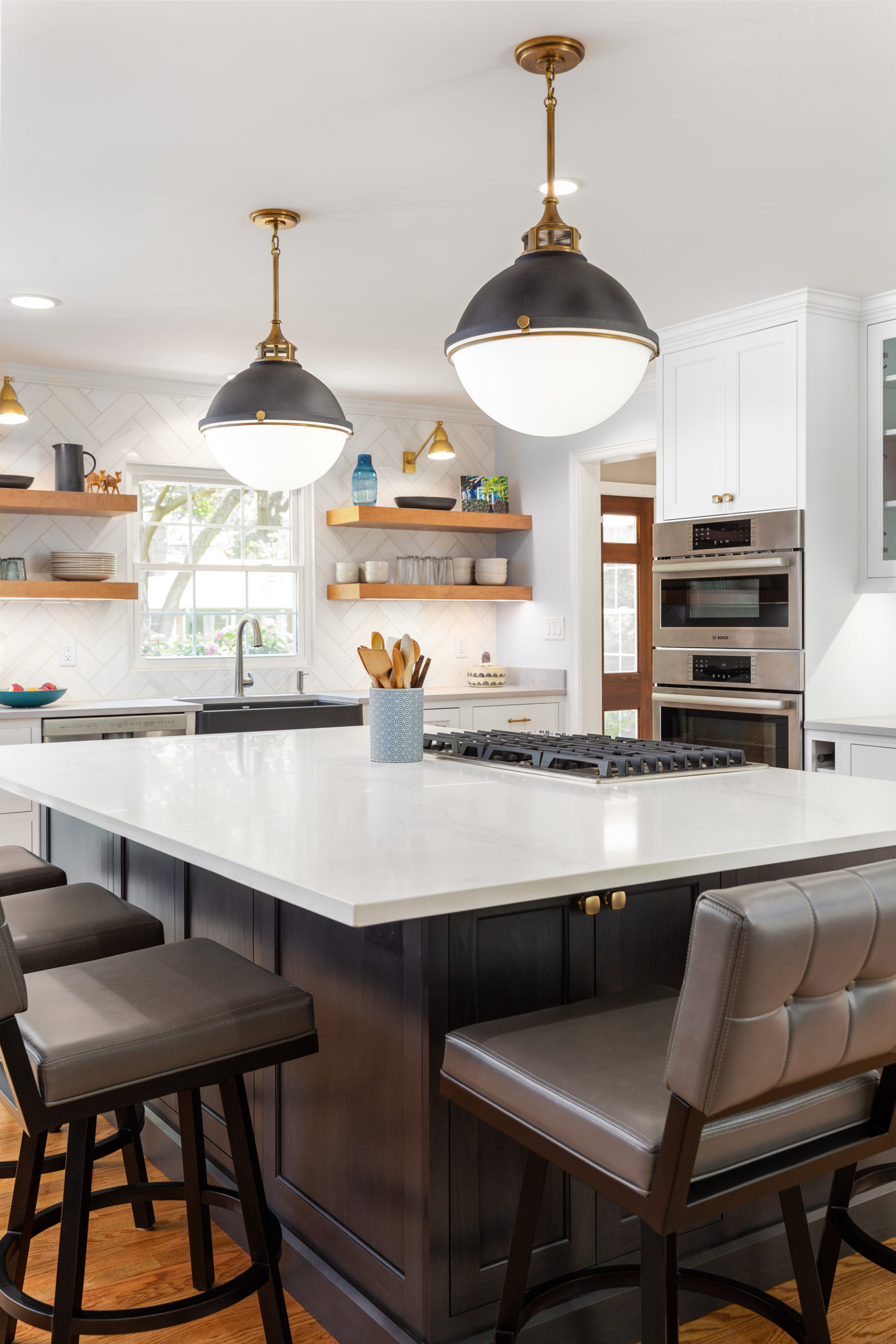 The homeowners expressed early on they wanted their range to be on the island and open to the rest of the room so they could continue conversations while preparing food. They collectively decided a standard range hood would block the space visually contradicting the feel we were going for. Thankfully we have a team of very talented craftsmen and Keith Brockman and his team were able to alter the cabinet drawer boxes to accommodate for a downdraft vent for the range. 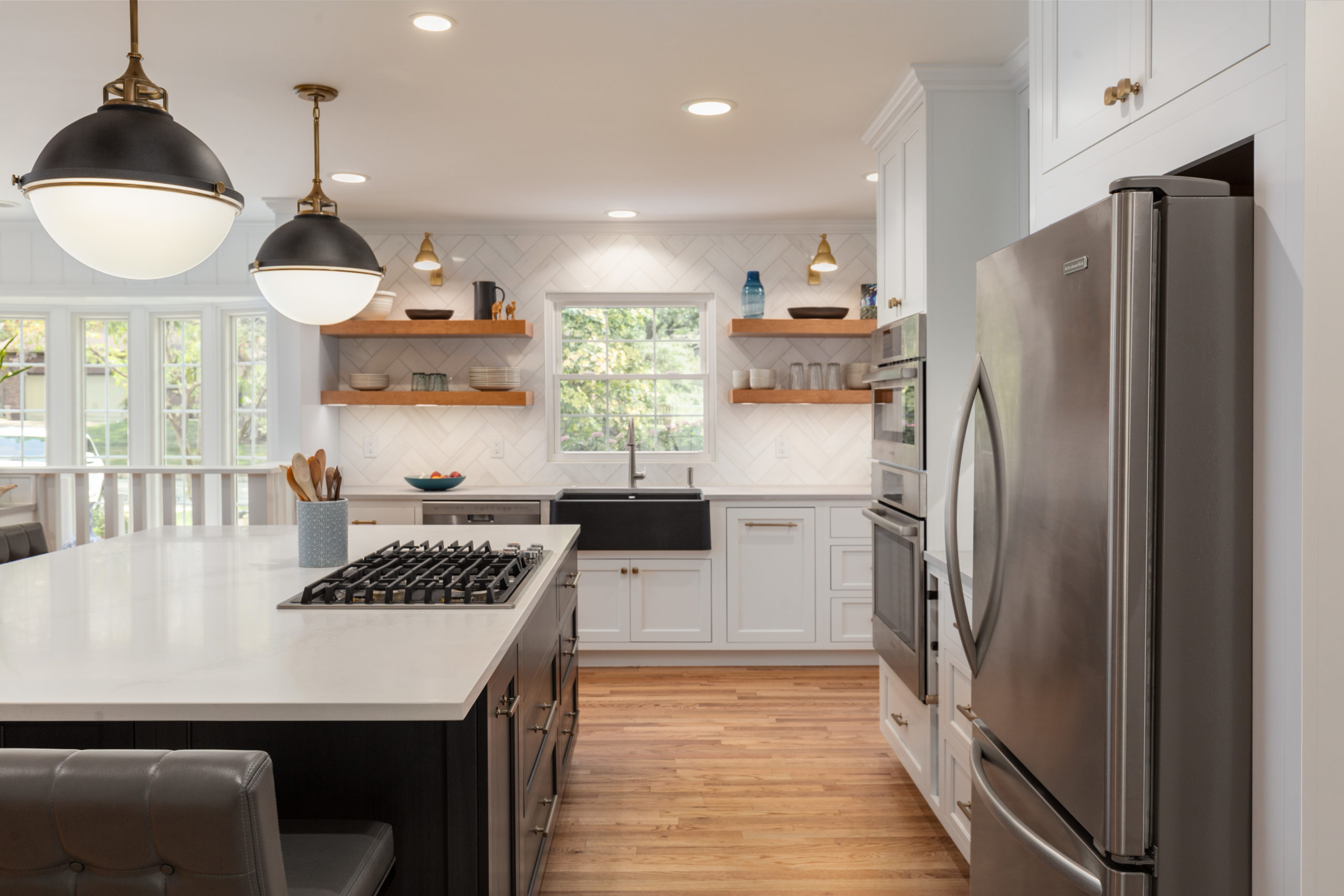 The perimeter wall directly behind it has the oven, microwave, and refrigerator. On the oven wall, a glass display cabinet houses glassware and below we tiled in a beautiful mixed stone accent wall. The countertops are Caesarstone quartz. The perimeter is Airy Concrete while the island is Calcutta Nuvo. Nina and the homeowners found the perfect countertop slab whiling were looking in the warehouse. The slab, Airy Concrete, was brand new at the time. They all instantly knew they had to have it! The coloring provided a softness that pulled together the stained cabinetry we had already selected. 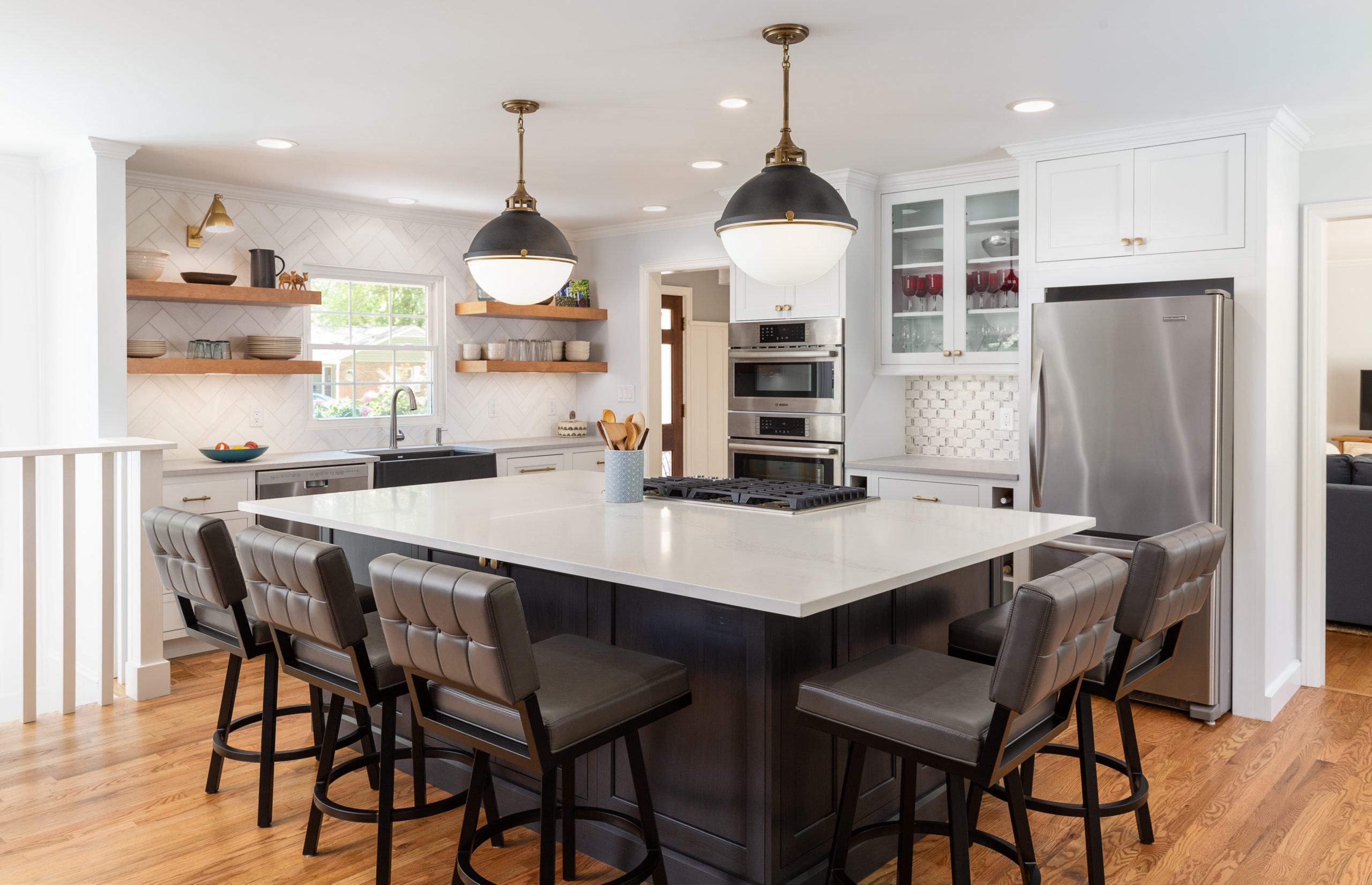 Nina and the homeowners went through each cabinet with the homeowners. They discussed what and where each item would be stored. They designed the space specifically for this homeowner’s functionality and wanted to make sure when they unpacked their dishes and small appliances, everything had a spot; it was our no dish left behind policy.

The pendant fixture above the dining table was in the homeowner’s previous kitchen and they were able to reuse it. It has a great raw steel finish.  Nina carried that same finish through several elements in the space including the barn door track and the island pendants. The space has an awesome play of mixed metals. The cabinet hardware, wheels on the barn door, and lights above the sink are satin brass. A new larger pantry was created on the perimeter wall. A barn door opens to the pantry instead of swinging doors which saves floor space. The barn door was painted a color similar to the island’s stained cabinetry. 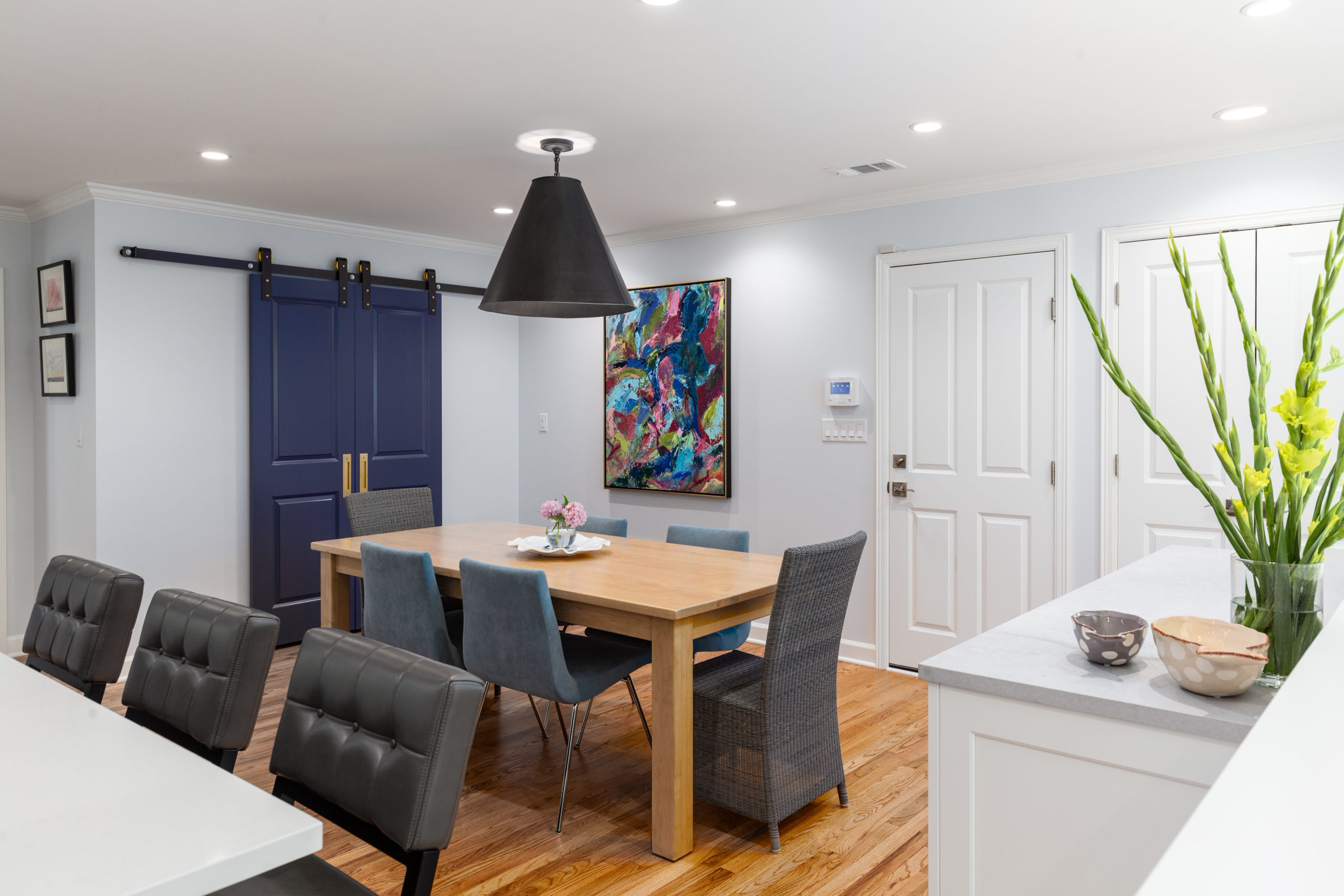 The homeowners are thrilled with their new spacious kitchen. It transformed their home into a place for gathering and entertaining. Not only do they have plenty of space in their kitchen, but they are finally utilizing their living room to its full potential.

Thinking about updating your home? Give us a call to speak to a Schloegel expert.

Nina earned her interior design degree from WATC. She started her career as an interior designer for a remodeling company in her hometown of Wichita, Kansas before joining the Schloegel team in 2016. Nina’s sense of style, attention to detail, and strong organizational skills make her an exceptional designer and it shows in each and every project.