Schloegel is celebrating 40 years all of 2020 and during that time we are going to highlight 40 past and present projects we’ve had the opportunity to work on. Missed some? Take a look at all the projects. This is our fifth project where Gayle Jagoda and Doug Schauerman created a custom, unbelievable in-home movie theater. This project recently won a 2019 All Star and Silver REMY award.

When repeat clients of ours reached out to us to help with a new project we immediately knew it would be a good one! Their whole house remodel won a gold REMY back in 2015 and we loved working with them. They had recently purchased a Spanish style home, a complete 180 in aesthetics from their old home, and wanted help creating a basement movie theater. They had a movie theater in their previous home and were excited to create one in their new home. They also wanted to somehow add a shower to their existing basement bathroom.

Because our clients had a movie theater in their previous home, they knew what they wanted. High up on their list were movie posters displayed outside the theater creating the feel of a marquee. They also wanted the exterior wall of the theater to stay true to the home’s aesthetic and tie in with the basement. Finally, having two rows of five seats was a requirement.

Leslie Hatfield and Katy Culwell, on our design team, worked hard to put together a movie theater with their requirements and no detail was left out. As you are able to see the previous basement was predominately one large room.

Putting together the movie theater design proved more of a challenge than we’d initially thought as there were a few issues we had to workaround. The theater would be built to the right of the existing bar. The area had plenty of room but the problem we ran into was the soffits. We had to work around them to create the elevated seating and make sure that there was plenty of headspace so no one bumped their head. Along the same lines, we had to make sure viewing wasn’t disrupted. The other concern was the spacing of the ten seats in two rows. There needed to be enough room between the rows so people could move in and out in the dark without bumping into others and they needed to be elevated at the right heights so you could see over the first row.

Our wonderful design team came up with a solution that was able to work around the soffits while still delivering ten seats with space to move around and elevated appropriately for viewing. They created steps going up to both rows and then dropped them back down in the back of the room.

Lighting was a crucial element in the theater design. Our clients had custom fixtures made for their old home and wanted them used in their new theater as well. We were able to incorporate them into the design and they are along the back wall. The height of the wall sconces took planning to make sure they were installed high enough so no one would hit their head when walking by whether the theater was light or dark. Every step in the room has LED strip lighting with a filter lens. The seats also have built-in lighting around the cupholders and underneath each seat.

We worked closely with our Audio-Visual partner throughout the entire project to make sure everything was incorporated correctly including the projector height and televisions on either side of the screen. The projector needed to be installed at a height that projected properly but didn’t impact anyone’s viewing. 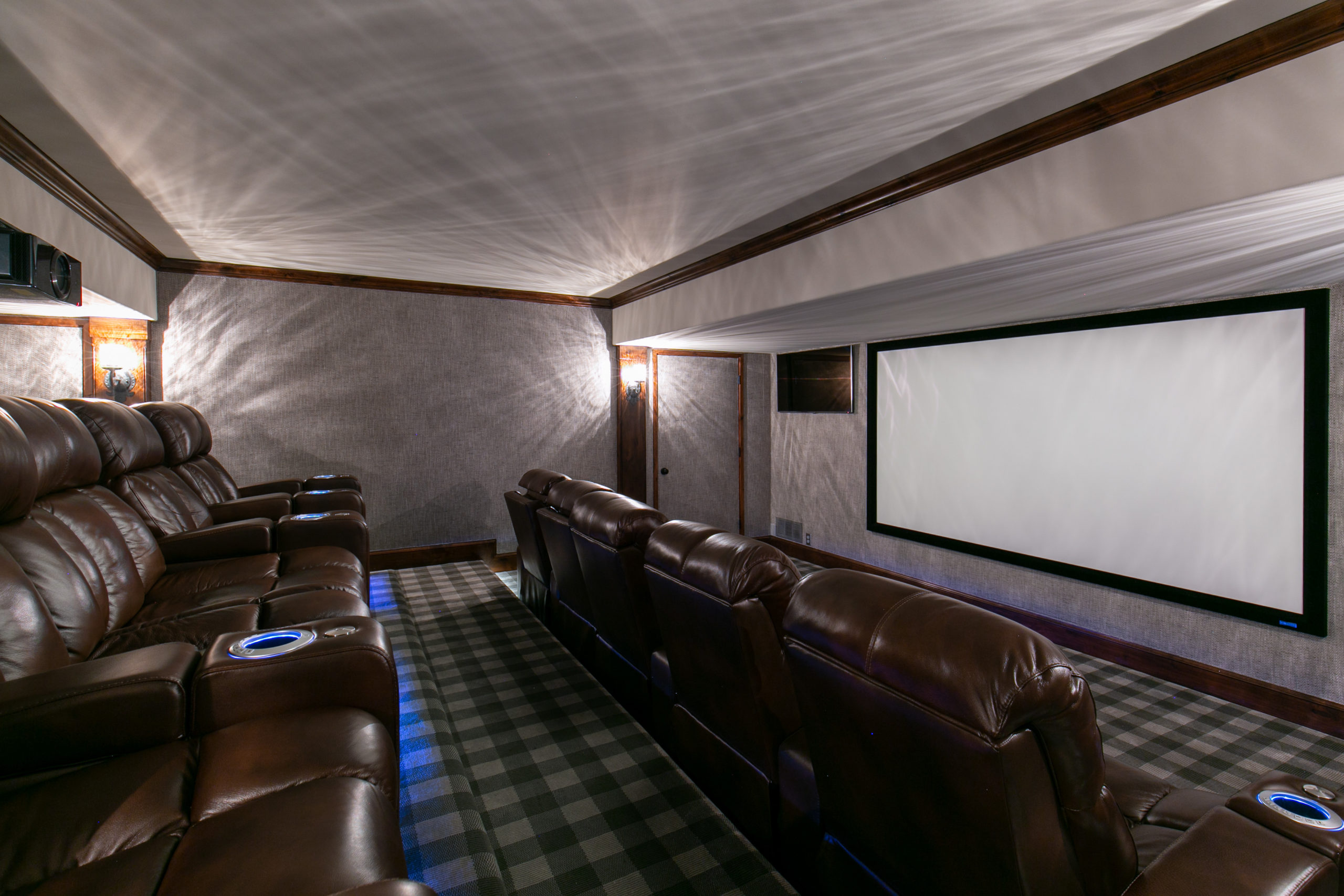 The speakers are hidden but not muffled behind a slight herringbone pattern wallpaper. The client selected a carpet which added a fun pattern to the design of the room. We designed a custom table at the back of the room where the elevation goes back down. The table is bar top height for setting snacks and food and beautifully ties into the room with its metal legs with a granite top.

The entire media room is elevated off of the floor in case there is ever a water issue. It’s barely noticeable but there is a slight slope up when entering the room. We wanted to avoid having to step up into the space.

A standard drywalled wall outside the theater wasn’t going to cut it. Our clients wanted the wall to create the feel of a theater marquee while also staying with the Spanish aesthetic of the home. We created a stone wall with built-in columns. The columns were built and stained to match the existing columns in the basement. The stain was matched and is also carried on the door. Doug and our team created custom movie theater posters that are backlit.

The existing basement only had a powder bathroom. Our client wakes up early each morning and uses the home gym, rather than traipsing back upstairs he preferred to shower in the basement and asked if there was a way to add a shower. The bathroom backed up to a closet in the gym that was fairly unused. We were able to eliminate the closet and create a large shower. We kept the remainder of the powder room as it was so wanted to make sure the new shower tied in with the existing design. The floor of the shower is sliced pebble and the walls in and out of the shower are tiled in a SOCI brick mosaic. The tile choice makes the entire bathroom a bit more modern while playing well with the rust-colored floor tile. 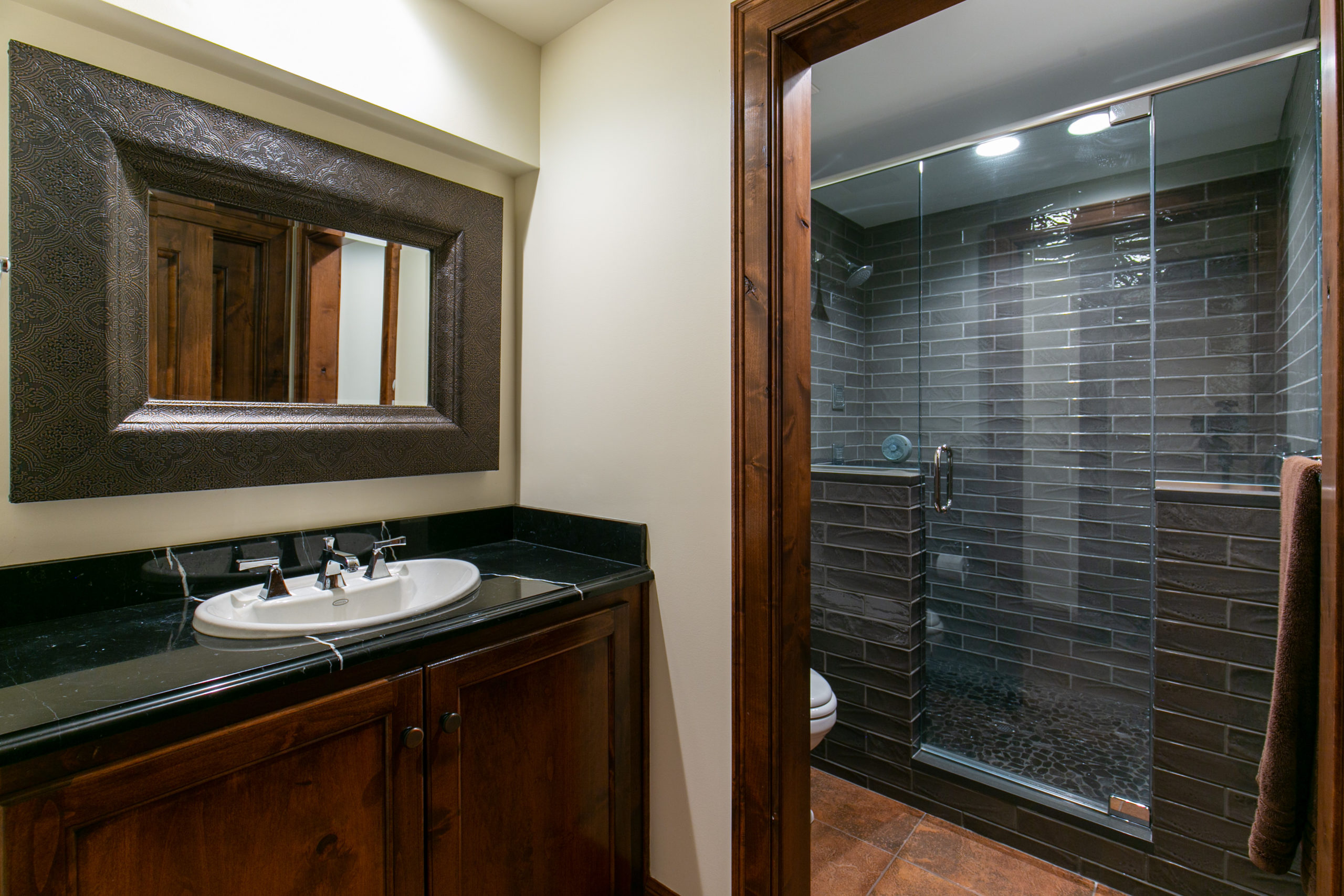 Our team had so much fun working with this wonderful family and creating this amazing, novel space.

Thinking about updating your home? Contact Us to speak to a Schloegel expert.