On our latest podcast episode Matthew Anderson, Architectural, Interiors, & Design Photographer joins the podcast. Matthew shares how he got into photography, specifically architecture, and how to capture a great image.

How did you get started in photography?

It was a hobby for a long time. The first time I ever touched a camera with, the intent of making a cool photo I found, was my mom’s old Pentax camera. It was an old film camera. I thought it was cool how you have more control over how your pictures turned out. Even before that, I loved taking photos, but I always had those old, little thin cameras. They’re almost like visor thin but it’s all auto. The only thing you could change was the ISO, and how sensitive the film was. But then I always thought it was cool.

I was wondering how do photographers get those blurry shots? You know, like Someone’s face is in focus, but the background is not and then I learned, oh, its aperture, but I can’t control it with this camera. Then I found my mom’s camera and it was like, oh, you can do it with this. So, I figured that out.

I did it as a hobby for a long time. Through middle school and high school, I took classes. but those were just fun. Kind of like brush-off classes because I knew how to do a lot of the stuff. I went through several years where I didn’t own a fancy camera at all. If you want the full, honest truth the reason I got back into photography was there was a Groupon for a boudoir photographer and my wife wanted to do a boudoir shoot. And then she got really uncomfortable with the fact, that there’s going to be someone else taking them. And I said, well, how about I do, I’ll just buy a kit. So I bought a camera and I started diving more into it and I was always appealed to headshots. I thought headshots were cool because almost everyone is very good-looking no matter how critical they are of themselves. I started doing headshots they were the first thing I ever shot professionally.

Then I was at a karaoke night thing and a friend of mine did real estate for Reece & Nichols and she says we hire photographers all the time. Because we need photographers to take photos of our listings and I thought I can do that. How, how hard could it be? I’m a good headshot photographer. How hard could it be? An inanimate object? It was very hard because the first listing I ever shot; the photos were terrible. And so I’m kind of that guy, if I have an interest in something and someone tells me I’m not good at it, I will go full throttle to borderline obsession and figure out not how to just do it. I want to be great at it. And so that’s how I started to dip my toes into the water of architectural buildings and interiors.

How do you make architectural pictures great? What’s the trick?

I’d say that if you made a top three or five list of what makes a good architecture photo number one is composition. What are you filling in the frame that makes it interesting? And then right under that, a quick second is lighting. You could take a beautiful space and make your composition fantastic. It really kind of tells an interesting story with a photo, but if the lighting’s not great, you’re not going to make as much of an impact. If you have those two combinations that are filling the frame matched with great lighting you can grab an amazing image just from that.

Some people think it has to do with the equipment and how good you are at editing. I say that’s way down the list. It really is. I first started shooting architecture with Canon T3i Rebels there were lenses that come as a bundle. I took great images with that. It’s like telling a Wolfgang puck, “Hey, you make amazing whatever chocolate souffle. What kind of pots do you have?” It’s Not a big factor, he can cook with anything. So yeah, equipment’s down pretty far down

You’re telling me I can shoot those same quality photos with my iPhone?

I’m not kidding, you can. The problem is, is there’s a little bit less control with, with the camera phone. If you get a good composition and get good lighting. You can take amazing photos with an iPhone. But as you and I have both seen we are always subject to a lot of times the clients that we’re shooting, towards their schedule. So, the ideal lighting might be 6 45 in the evening, but they don’t want us coming there because that’s when they’re making dinner, the only time we can show up is at 2:00 PM in the afternoon. So, you have to make 2:00 PM in the afternoon and look great. 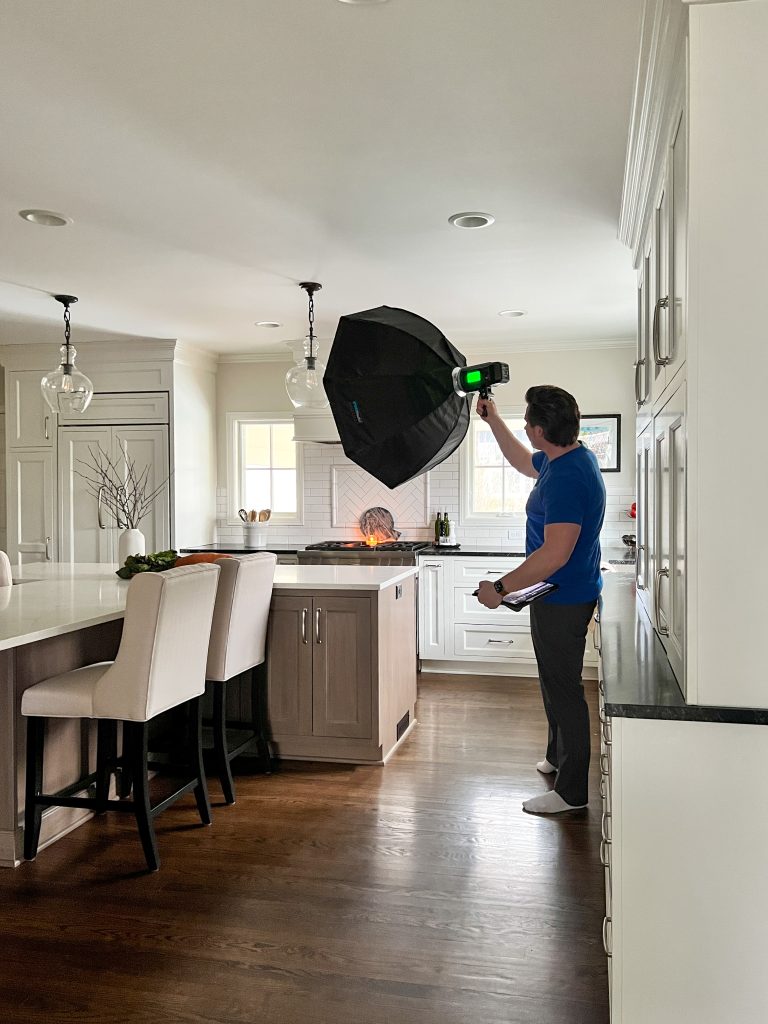 Fake it. As you’ve seen, I look like a goof, holding the flash at certain points. I remember when we first started working together, I had to explain why I’m popping flashes in the cabinets and stuff.

Why do you think it’s important to have great photography when you’re showcasing a home or a building?

I think for a company, like yours, a home builder, an architect, or an interior designer, a majority of the time these photos are your storefront. Very few, a fraction of a percent are people who are actually going to see your work in person.

Schloegel has done hundreds, maybe even thousands of projects at this point. Inevitably when they’re interested in remodeling, they’ll look them up and then they’re going to look through Schloegel’s portfolio. They’ll do the same for a home builder or architect, whatever it may be. They’re going to look at their images. How good of projects have they done and then the quality of the images as well.

I’ve seen custom home builders that make amazing houses, but all their photos on their side are taken with an iPad. They’re handheld, the camera’s kind of crooked. It’s a little tilted. The colors aren’t right. It’s too dark. It’s too bright. And so, to me, it also speaks of how much a company takes pride in its own work. Yes. I’m not cheap. A lot of great architectural photographers are not cheap, but that being said it shows how much pride a company takes in their own work to say, you know what? We’re okay spending the money to have a professional photographer photograph these. Their photos are going to make our projects look fantastic.

Do you have aspirations to do more than what’s in Kansas City or is the Kansas City market pretty awesome for architectural photos?

Ooh wow, I have not been asked that but I have thought about that. I think it depends on what my goals are. I can’t say for sure either way. When I first started shooting real estate, I got extremely excited when the parade of homes would happen a parade of homes, so cool. All these builders are putting their best foot forward there. They’re spending thousands of dollars to say hey look at our work. The longer I do this the more, all those houses start to look the same.

I think it’s kind of the 80/20 rule. 80% of the houses on the parade look like the rest of the 80%. There’s always a small fraction that really stands out. And then here in Kansas City, the houses that really stand out, get their own separate showcase every two years. They do what’s called the Artisan Tour which is this coming June.

As far as a variety of things to shoot. I do think Kansas City itself is a little, the Midwest is always behind when it comes to many things, pop culture, just fashion, stuff like that. So, if I really wanted to push hard for photographing new residential architecture, I would have to move to a different market. I’d probably have to move somewhere and LA is kind of a Mecca for architectural photographers who want to have so many beautiful, interesting houses in such close proximity.

That being said, the other side of that coin is comfort. Which is Kansas City. If you can be amazing here in Kansas City, I mean, you’ve kind of made a great niche for yourself. So yes, a lot of the houses look the same, but then there’s also comfort you walk into a house and you’re like, oh, I’ve, I’ve shot this for floor plan before I know how to shoot it.

Do I have any plans on moving? No, I don’t, but I’m never one to say for sure. Either way, I’m doing pretty well here in Kansas City. There is still a variety of things to shoot. That’s one of the reasons I enjoy shooting for remodelers here in Kansas City, especially Schloegel’s designers, they push the envelope a little bit more than maybe your average cookie-cutter designers. When someone says, hey, I like A, B, and C well, your designers go, Well, how about A, B, and C but with a little bit of spice. That makes Schloegel projects a little bit different and makes them stand out from say your average cookie-cutter remodeling company that may do a good job, but they just do nice work. Schloegel has this personality and fingerprint on a lot of their work. So that helps out quite a bit.

Are you the big fish and the sea? There are not a ton of architectural photographers in Kansas City?

A friend of mine is a pretty well-known architectural photographer. He’s based in LA and just the stuff he gets to shoot it’s unreal. And he just kind of keeps topping himself every single year. He’ll walk into a $50 million home and he’s there for two days straight shoot photographing the whole thing. I’m like, that’s awesome.

What are your long-term goals with photography?

I don’t know. I don’t know what’s happening this, year. This year is kind of an interesting year. I am diversifying what I’m doing professionally. My friend in LA, his name is Mike Kelly, has shaped a lot of architectural photographers, careers, mine included. He’s put out several tutorials last year I started writing articles for him on his side. He saw some of my YouTube videos and decided, we should partner up and we’ll create a video tutorial series about the business side of architecture photography. There are a lot of tutorials that tell you How to shoot, but there’s not a lot of information out there about how to run your business. Mike is pretty good at that, but the business stuff is scary. He puts little nuggets at the end of a tutorial and then he’s been on several podcasts. So, we did that, it’s not it hasn’t been released yet as of recording this.

And then my YouTube channel is another thing where I just crossed the threshold of being able to monetize. Now I can start generating revenue off of YouTube. I’m not going to be making money hand over fist. The more videos I put out there, the more views they get. So, we’ll see. I can never say for sure what 2023 or 2024 is going to look like. I quote the joker a lot from the dark. night. The one I use a lot is, “Do I really look like a guy with a plan? I just do things.”