Dark. The word on repeat when our client described her existing kitchen. The kitchen originally had builder-grade golden oak cabinets. Somewhere along the way the cabinets were updated and glazed with a dark stain. Our clients reached out to Schloegel to help with their kitchen design and found the perfect designer in Nina Schmidt. She listened to qualms of the existing kitchen and wishe list for their future kitchen a put together a design that would create their dream kitchen!

Take a look as Nina walks us through the future plan in the previous kitchen.

As we mentioned the kitchen was dark. The dark paint didn’t help alleviate the dark cabinets. The island and bar had been finished in an off-white color at some point but didn’t inject enough light. The kitchen had a funny juxtaposition of too much wasted space alongside tight spaces. The amount of counter space across the kitchen was immense yet the space next to the sink next to the fridge was lacking.

Additionally, the cabinets weren’t functional. There was a lot of cabinet space but without any sort of organization or inserts stuff tended to just get lost. In fact, when our client was emptying the cabinets out for her remodel, she came across unopen wedding gifts. To put that into perspective they have a college-aged daughter.

Working together our client and Nina decided they wanted to the new kitchen to capture a European farmhouse with a cottage feel. That meant lighter cabinets with wood tone access. A kitchen that felt accessible and comfortable a definite reversal to the traditional vibes of the existing kitchen. Nina’s goal was to really capitalize on the function of the kitchen. She wanted each cabinet to have a purpose and end the manhunt for missing dishware. 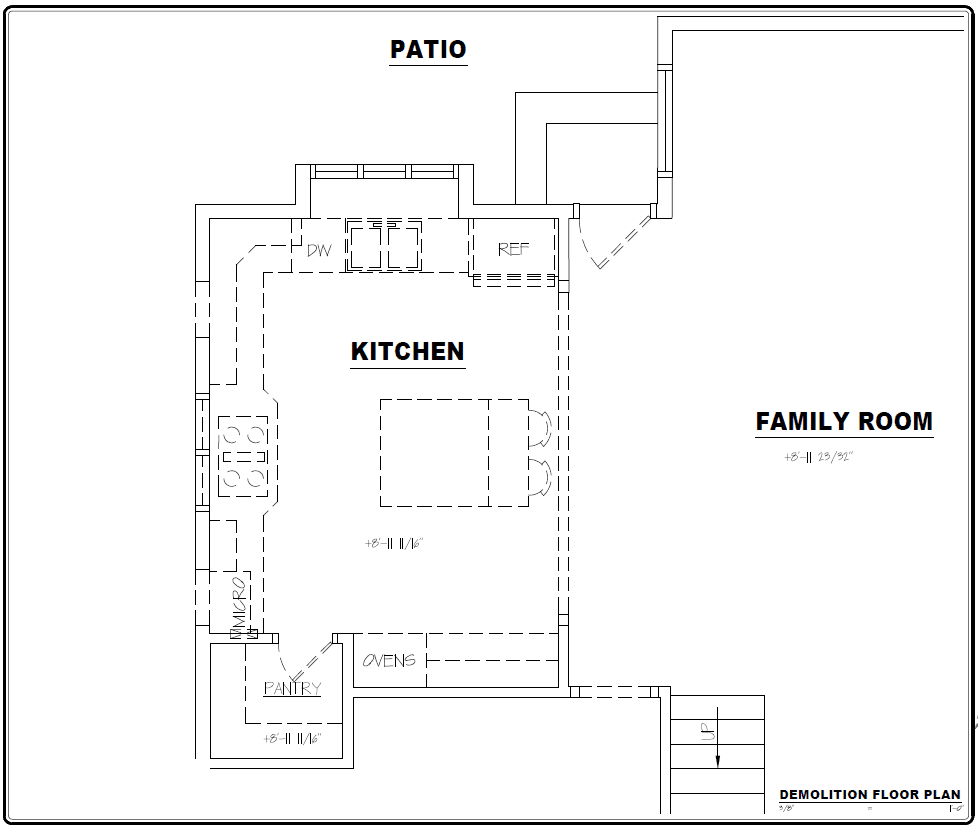 The first thing she did along was re-layout where the appliances would be. She put in a range instead of a cooktop at the back of the kitchen and removed the window behind it to allow for a range hood. This created a focal point in the kitchen. To add natural light back in she flanked either side of the range with new windows.

Next she elected to move the fridge to the previous oven locations. This move opened up the space to the right of the sink alleviating the previous tight spot. The microwave would be tucked in an appliance garage where the unused desk used to be.

We were able to enlarge the island a bit and added sits at an overhang on two sides. Nina added large drawers on two sides of the island. Drawers are the perfect solution in kitchens. You can pull the items out to you in a drawer verse bending over to dig through a cabinet. They’re a great space to tuck away pots, pans, dishes and so much more.

Finally, the pantry will get a revamp as well. Swapping the swing door for a pocket door will make the pantry much more usable. Nina also created a custom cabinet plan for the pantry so everything will have a designated space.

Check back soon as Nina gives us a construction progress update and shares the selections!

Welcome to another episode of the Schloegel Design Remodel Podcast. Today I have Lindsay Brungardt of END_OF_DOCUMENT_TOKEN_TO_BE_REPLACED

As we know, remodeling can be very expensive, especially in today’s world, and sometimes figuring out END_OF_DOCUMENT_TOKEN_TO_BE_REPLACED

In this episode, we welcome Megan Pittman. Megan is a designer at M. Sudermann interior design END_OF_DOCUMENT_TOKEN_TO_BE_REPLACED

On our latest podcast Donna Kirsopp, CKBR joined us to discuss how she designs outdoor spaces. END_OF_DOCUMENT_TOKEN_TO_BE_REPLACED