When Ron Webster first walked through this house with the owners, it felt disjointed. The interior did not match the mid-century exterior. The home sits on farmland that has been in their family since it was originally settled over 100 years ago and they wanted to update the 1960’s house to their lifestyle. Ron worked with them to update nearly the entire home with special attention to the kitchen. Jeff Penrose lead the project construction and we’re pretty excited to share this phenomenal kitchen with you!

The kitchen was dated and had an awkward layout. The peninsula obstructed the views and pathway into the kitchen. Every countertop had a sink. The soffit cut off the ceiling making it feel closed in. The range butt up against cabinets making it difficult to get things in and out and the island was more a hindrance than a help. Finally, the entire look was dated with old cabinets and track lighting. 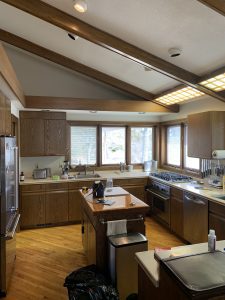 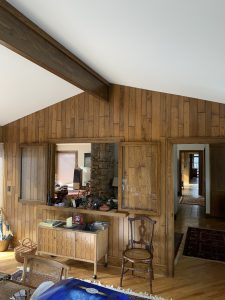 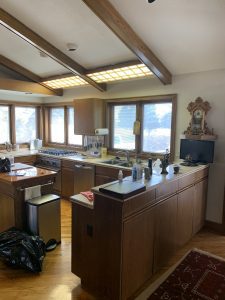 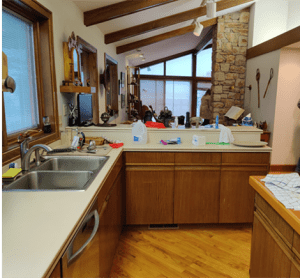 Our clients wanted to change the style and function of the kitchen. They wanted to have a kitchen that allowed them to entertain, while also being functional for everyday use. An improved layout was a must and with that, they wanted seating for guests. They also wanted it to feel open to the rest of the home, rather than closed off.  High up on their list of wants was a design that fit within their mid-century style home. Also on their list, lighting. Even with a wall of windows, the kitchen felt dark. Our clients knew they needed updated lighting to achieve the ultimate look they wanted.

In order to create the open, feel our clients wanted Ron and Leslie Hatfield decided to remove the wall that separated the kitchen and dining room. Next, they created a new layout for the kitchen. With entertaining high on their list, we knew we had to re-imagine the entire kitchen. The existing U-Shape with a small island blocked the flow into the kitchen and didn’t leave much room to move around. We needed to start from a blank slate and ripped out the existing kitchen to create an open concept that would include an island long enough for a dishwasher, double trash pull-out, storage drawers, sink, and large prep space, while still including plenty of seating. In addition to a range, our clients wanted a dishwasher dedicated to baking. Appliance placement became a bit of a challenge. While the range at the island was an easy choice it would have cut off the open feel they yearned for and views across the kitchen. A downdraft vent also didn’t fit their vision. Furthermore, our clients wanted to be able to see outside while cooking with unobstructed views. We landed on the window wall for the range as it best fits their needs however this brought on the issue of the hood vent. 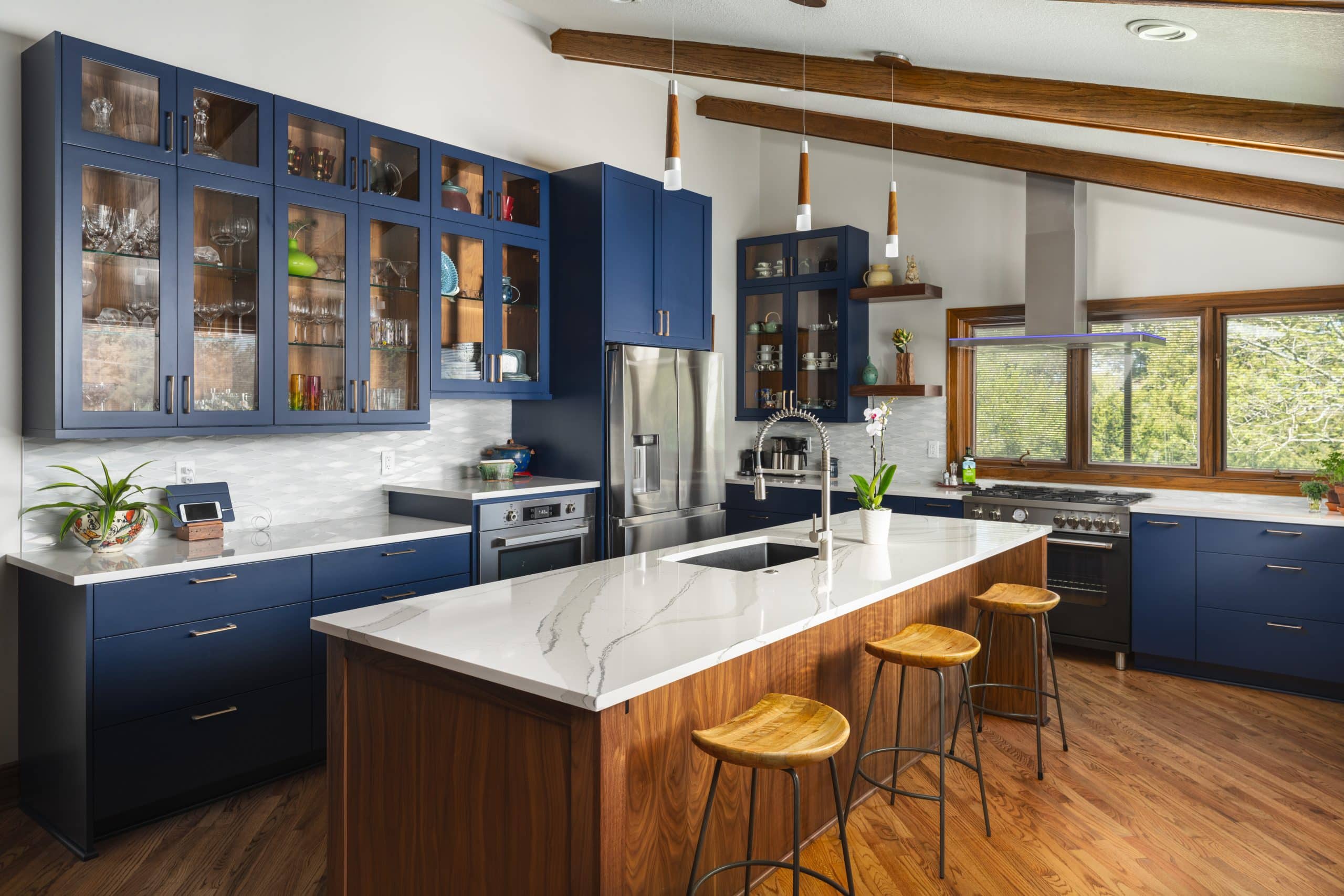 We love all our projects but this one is something special! Capturing the mid-century style of the home in the kitchen was paramount, as it needed to jive with the rest of the home. The trick was to make it feel current while also tying it into the existing wood tones throughout the home. After lots of back and forth, Ron and the clients landed on SW Naval for the cabinet paint color with walnut accents. The navy-blue color compliments the color of the original wood beams and window trim. We love that it plays a neutral while still adding color 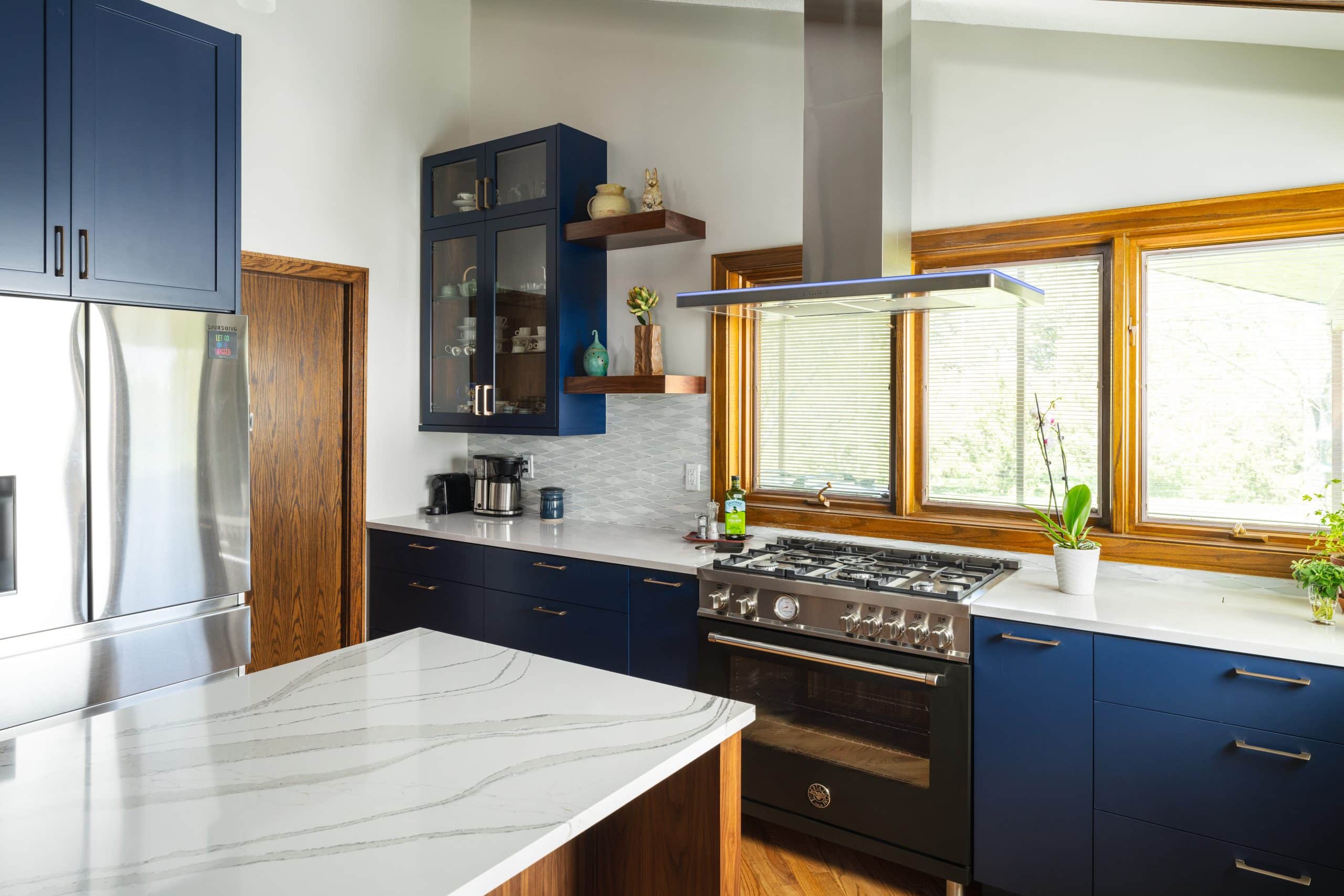 The two-tone cabinets add a subtle contrast and are consistent throughout the kitchen. The glass door cabinets have a walnut interior finish, which mimics the back of the island. The front of the island is navy while the other side with seating is walnut. This not only creates a beautiful contrast but is also functional for the wear and tear of people sitting in this area. The shelves next to the range hood keep the upper area open and bright while also providing a place for décor. The backsplash is a unique blend of tile and glass that adds subtle movement to the room. The white countertops add just the right amount of cleanness to the kitchen, while not being overwhelming. 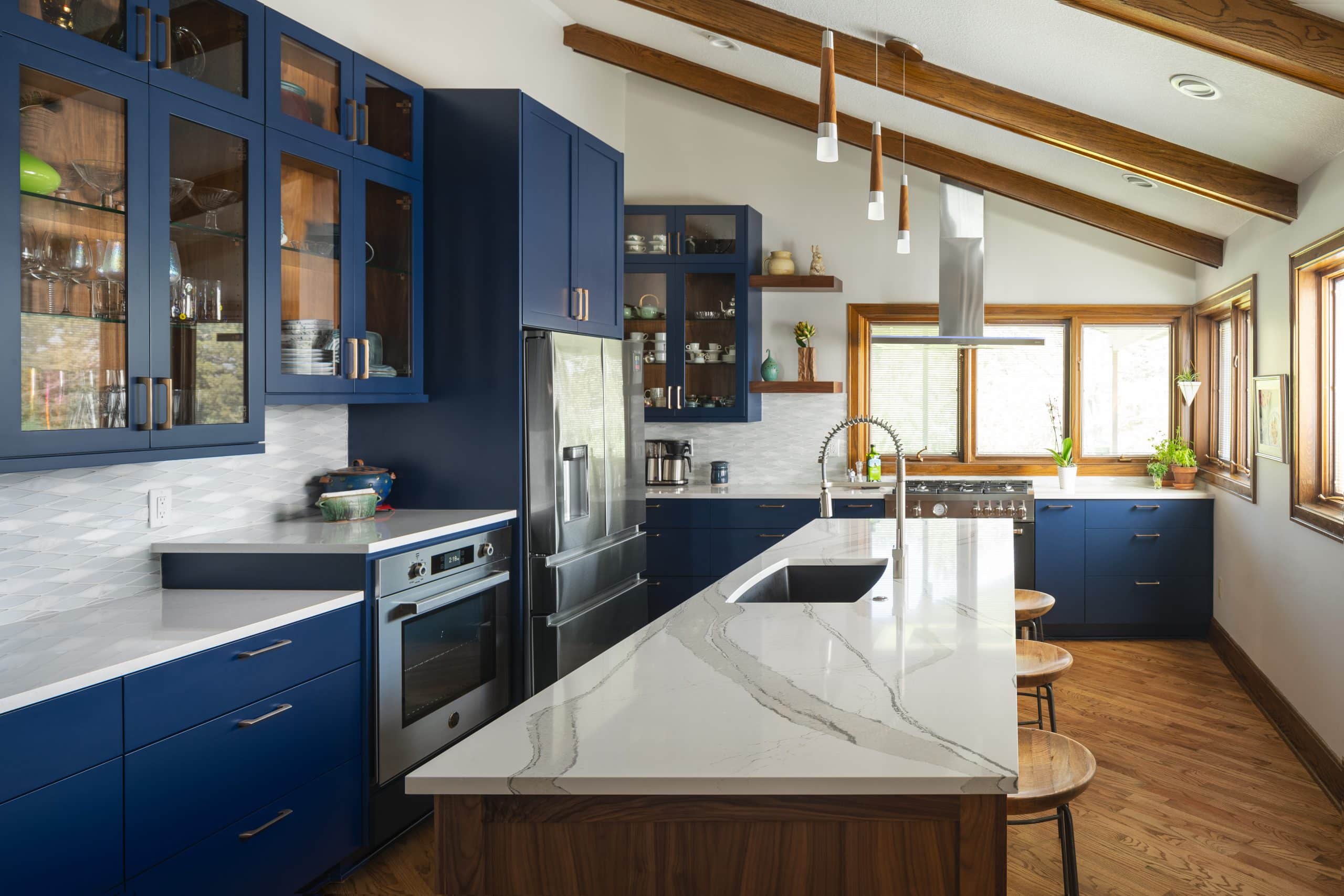 We were able to re-work the kitchen layout to include a large 10-foot island. Three sides of the island have a walnut finish which mimics the cabinet interiors. This not only creates a beautiful contrast but is also functional for the wear and tear of people sitting in this area. The clients never dreamed they would be able to have such a large, functional island and they absolutely love it. 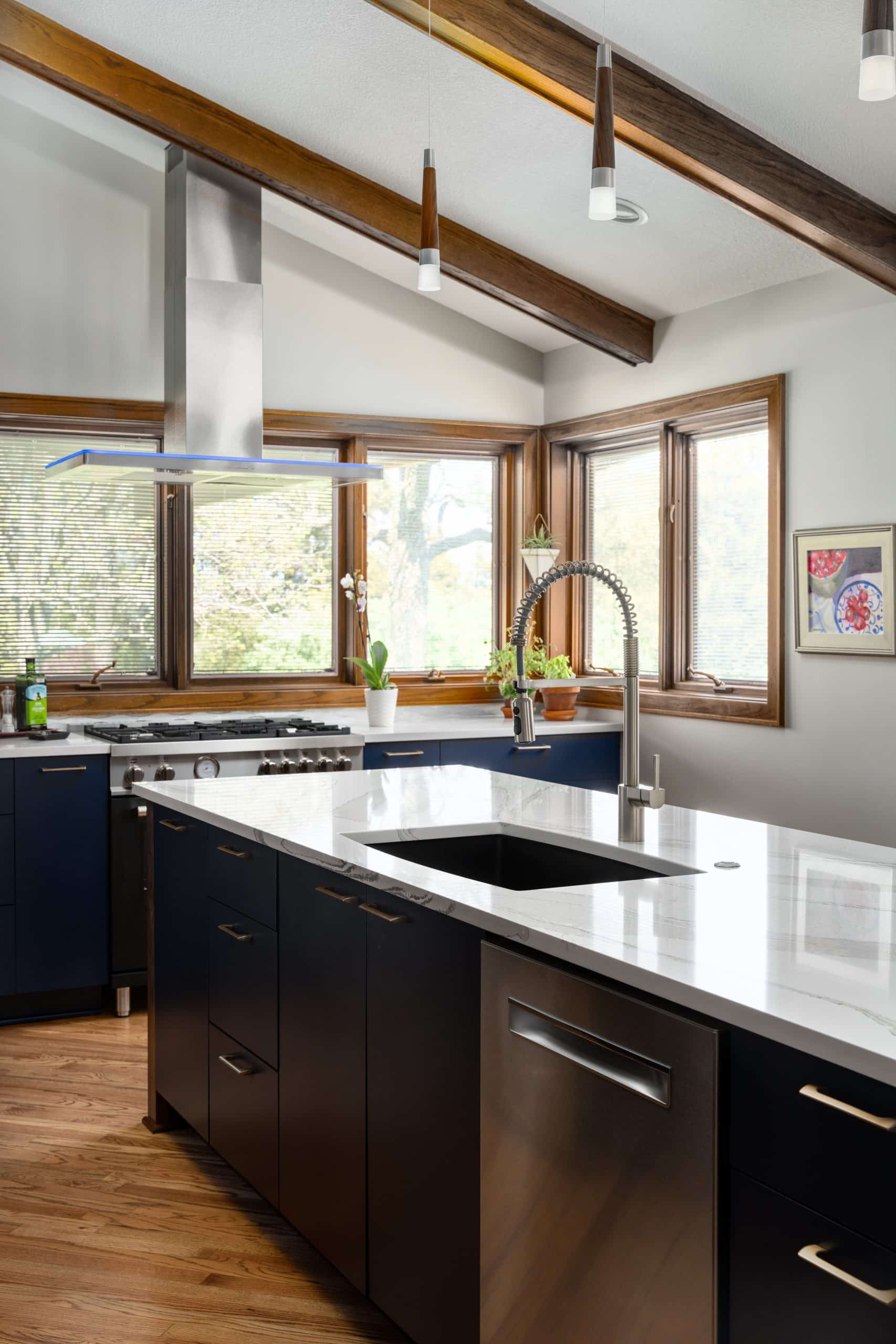 Removing the soffit automatically brightened up the space but we went ahead and added a fantastic lighting plan with recessed LED can lights on the sloped ceiling. The pendant lights perfectly tie into the space. They have a minimalistic design that matched the finish of the island and added to the mid-century modern style. Interior cabinet lights create drama and call attention to the walnut interiors. To really compliment interior cabinet lighting, we installed glass shelves letting the light flood all the way down. 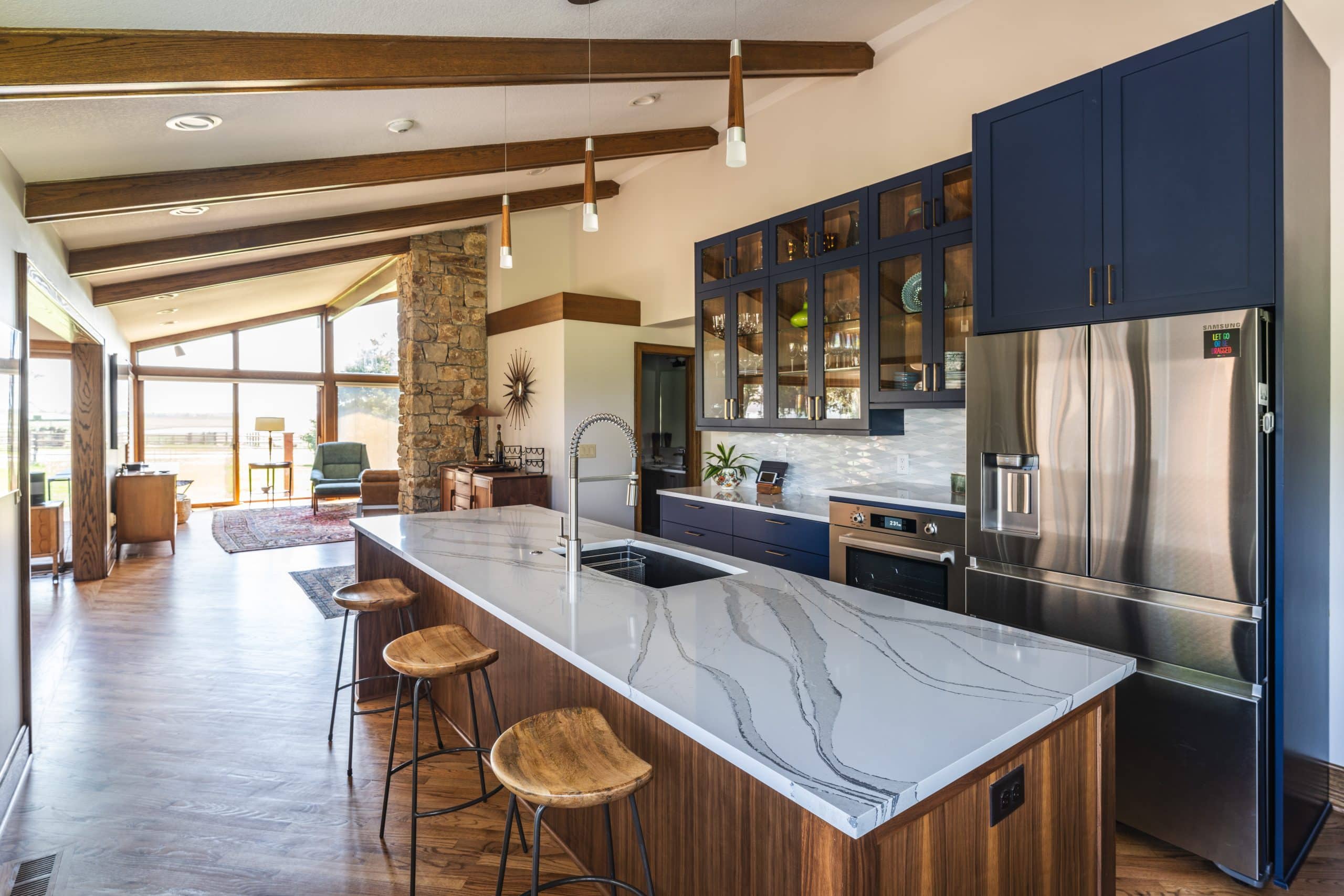 Removing the wall between the dining room and kitchen as well as the peninsula captured the open-plan our clients were after. The end result, a warm, open, spectacular mid-century home!

The new kitchen style is consistent with the home and perfected the beautiful mid-century modern look. The new kitchen delivered everything our homeowners wanted and more. It’s a warm inviting space to hosts friends and family with their historical farm as the backdrop.