On our most recent podcast episode, Schloegel’s own degreed architect, Leslie Hatfield, joined us to talk about how she re-imagines spaces to create more functional designs. Leslie has over 25 years of architecture experience, and she somehow manages to create brilliant designs for each and every project she works on.

What is the design process?

Out of the gate, the design team meets with the client. In that meeting, called meet and measure, we’re really just touching the iceberg of what we’re going to do. We walk through their space with the clients and really listen to what they like and don’t like about it. Throughout that Leslie asks a lot of trigger questions. These questions help them elaborate because they’ll tend to just walk through space and say I don’t like this rather than draw upon why they don’t like it.

Our goal is to really dig deep and figure out why they don’t like it and how we can make it better. The meet and measure really kick off the process for the Design Team.

The first thing we do is create the as-built plan. Leslie is then able to see the floor plan in a bird’s eye view and that is really when things start coming together for her. She may see things to change while at that initial meeting but she tries not to share those ideas early on. She likes to keep them to herself and then spin them when she gets them in the plan.

So, sometimes she may just see one idea but once she sees the floor plan she can push and pull and maneuver things. It’s there that she’s able to create something totally different. Something no one had thought of yet.

Leslie and her team always present multiple options to clients. The first one is usually a version of what they had asked for. Then a Plan B takes that initial idea and spins it a little more.  Maybe pushes some ideas they really hadn’t thought about or even asked her for. And then she always presents a C. The C is usually something totally different. A design no one had thought of it. Plan C has been coined the bam-sh-bam by the Schloegel team. Usually, this design also is tied to a larger price tag, it’s the firework finale of the design options.

Leslie starts her process old school with tracing paper and a big fat Sharpie. It allows her wheels to start churning without doing anything too precise that she can see how things work together. Once she has those ideas complete, they get entered into CAD by her team.

How to maximize space from small bathrooms to large kitchens

This goes back to how the clients use the space. We need to know what needs to get into that space and move and manipulate to make it work. Sometimes it’s spinning all the items until you get the right fit. And sometimes it’s hard to meet code but that is always something our team works to adhere to.

It can be tricky on some smaller projects. With larger projects, it’s easier to move things around giving you a bit more freedom in design. It’s the little bathrooms that can be the stumpers.

Leslie aims for aesthetics. What are the focal points, when you enter a room, what do you want to see? She tries not to get too stuck on what’s ‘supposed’ to go next to each other. There’s the old rule of making the triangle in the kitchen and Leslie doesn’t always like to let that be final. She does make clearances a top priority because you have to be able to move around and open things with enough space.

What do clients pick?

Clients don’t usually pick one of the presented plans. In fact, we’ll start off the meeting and we’ll tell them we’re about to give you a bunch of information today, and we don’t expect any of these plans to be the perfect plan. We’re going to take each of these plans, the things you like, and don’t like, and spin to make the best plan for you.

The final plan is usually a hybrid of the options we presented to them. Maybe they can’t afford C, but there are some things in it that they really like and want to incorporate in. So, it’s usually taking those ideas and doing one more last spin. 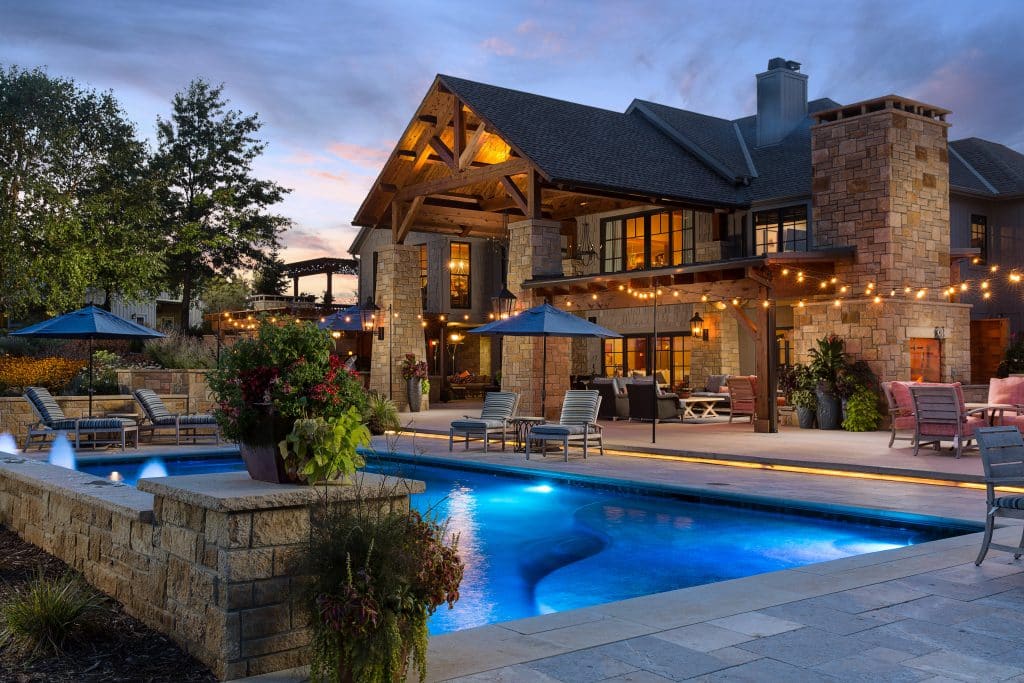 She’s loved so many projects she’s had the opportunity to work on. Many have received awards or been in magazines. She does hold one particularly close to her heart which is a large outdoor project for a local chef. It’s a pretty large project and included an outdoor living space with a large, rustic, covered roof, a pool, and an outdoor kitchen. There were a lot of moving parts to it. The project actually won a national award. So, it’s something she’s pretty proud of that.

Listen to the podcast for all the details and more information. Look for future episodes on Apple, Spotify, Google, or Stitcher. We’ll also make sure to share each episode right here on our blog.