Finding and Repairing a Shower Leak – Adventures of a Schloegel Handyman

This week we're excited to share a new series on our blog, Adventures of a Schloegel Handyman written by Lester Withers. Not only is Lester a craftsman on our Handyman Team but he's also a very talented writer.

I’ve often looked at our primary bathroom shower, appraised the shoddy tile work done by the people who flipped the house, and wondered how much water might be leaking into the surrounding walls and floor. While some critical seam sealing with silicone has allayed my worries, for the most part, I’ve wondered how much work it might be to tear out the whole shower system and replace it. Even if I were confident the tile was water-tight, it needs to be rebuilt sooner or later. My wife and I have only so much patience for standing against the wall because the shower head won’t adjust down far enough, or covering the drain with a rubber mat when it’s not in use.

The previous remodelers, rather than going through the effort of installing a p-trap, ran the drain line along with the concrete, likely right underneath or even through the floor joists; put in one 90° elbow; and built the shower on top of it. The drain line now slopes directly to the soil stack, which joins the mainline connecting our property to the city sewer system. Without a p-trap, a small deviation in the drain line forming a trough that retains water when the line is not in use, gas from the sewer can vent straight up the empty drain line and into our house.

Early in my handyman career, I was able to get a very good idea of how much work it might be to demo, replumb, and rebuild our primary shower. Putting in a p-trap will require elevating the floor of the shower about 3” to accommodate the helpful inbuilt drain line seal. It would also entail running a vent pipe up through the bathroom’s exterior wall and out the roof. And if there’s anything I’ve learned in a few years of construction work, I should increase my time budget by 50% of my original estimate, in expectation of the unexpected. This particular shower remodel was a perfect case in point. 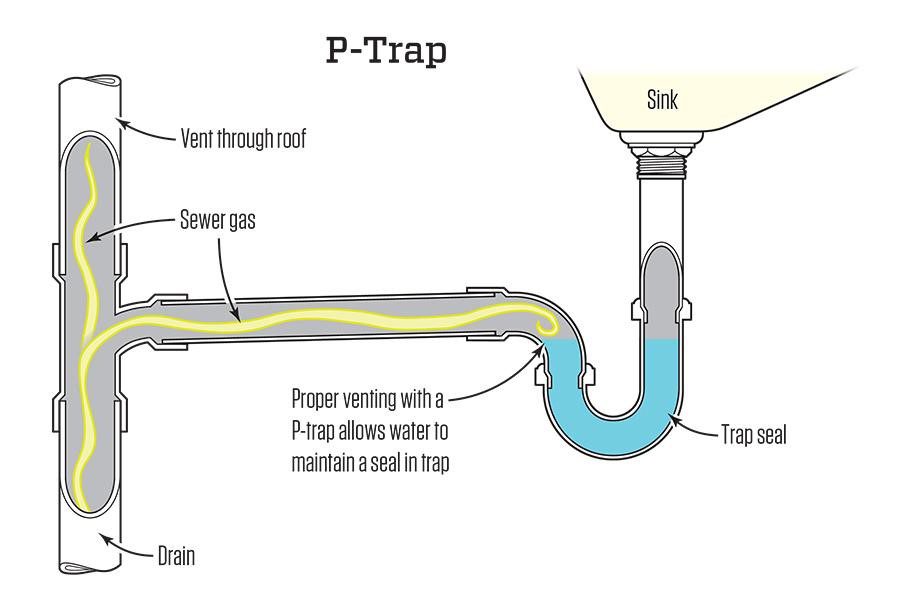 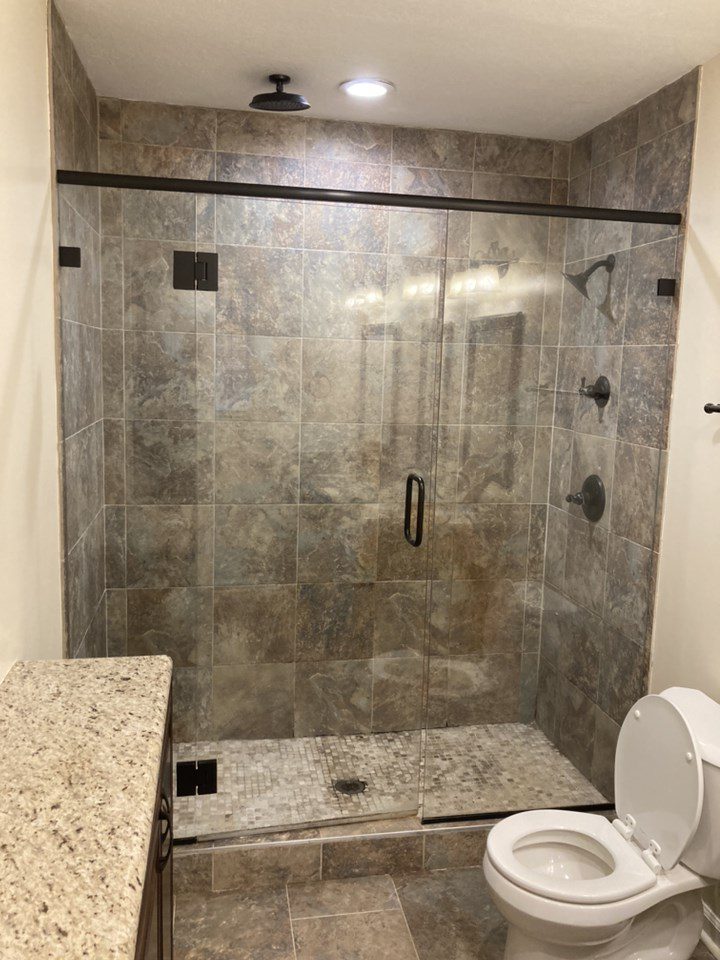 The owners of this shower sought our handyman services because of a leak that had appeared in the basement ceiling below it. It was clear the shower system was failing, but not clear what part of the system was failing. It could be a leaking drain pipe, a faulty diverter valve, or an issue with the shower pan. Like with many maintenance issues that present themselves, the only way to assess the problem was to tear it.

Removing the shower door and glass wall was the easy part--a couple of allen screws at a few different locations and a quick slice through the silicone adhesive. Then, we brought out the hammers and safety glasses. Our lead on the job, a quick learner with a few years of remodeling under his belt, knew how to break up the tile walls into manageable sections. We broke the shower, 72x36” with 8’ ceilings, into 8 sections. 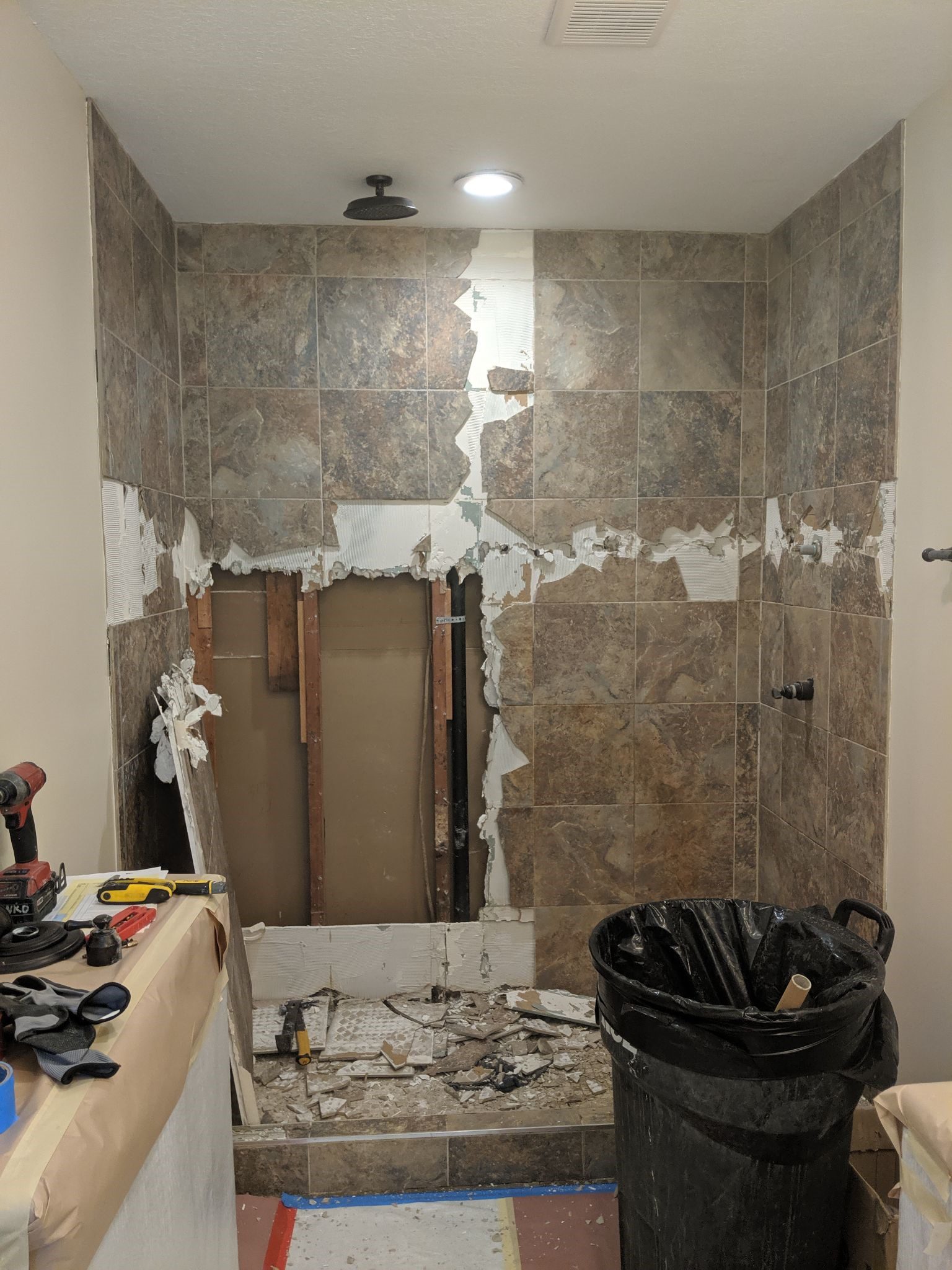 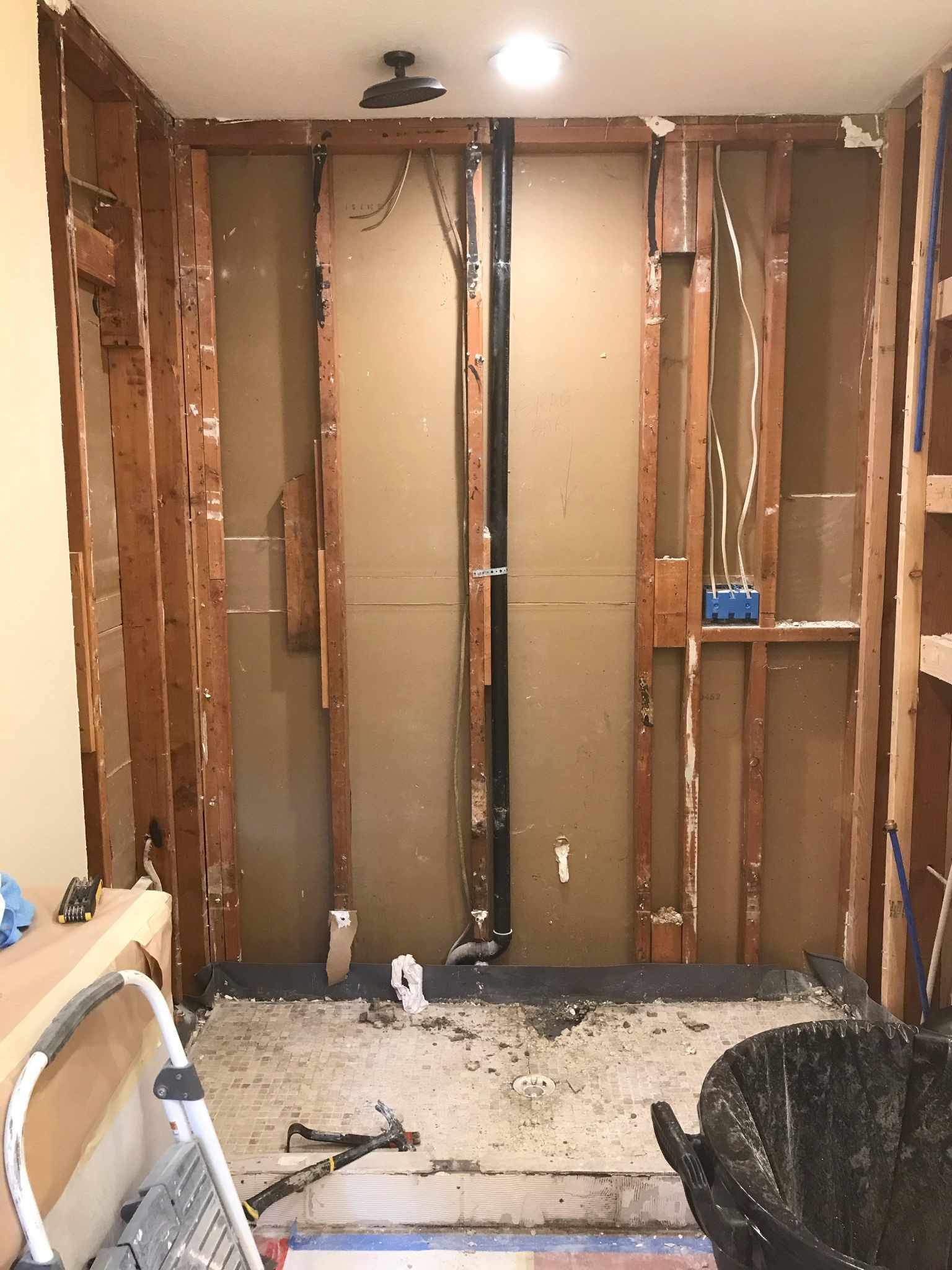 Backing the shower tile was standard ½” drywall. Arguably, drywall shouldn’t back tile, and bathroom drywall should be mold-resistant regardless. This was a lucky break for me, though. The 3x4’ sections of drywall, mortar, and tile were taxing enough to carry through the house and across the front yard, hoist into the pickup bed, and heave from the bed into an 8’-tall dumpster. The added weight of specialty drywall or concrete backer board would have made my soreness over the following days almost unmanageable!

Immediately after removing the walls, we found a minor issue to address. In attaching the drywall, the previous builders had forgotten the vent pipe that jogs through a stud and had screwed the drywall right into it. This was not the source of the water affecting the basement ceiling, as there was no moisture around it. The only water running through the said pipe is the raindrops that find their way into the 2” opening of the pipe sticking out of the roof, and the holes in the line were plugged by the same instruments that had made them. Still, to attach backing for the new shower, we needed the screws gone, which meant replacing the affected section of pipe. 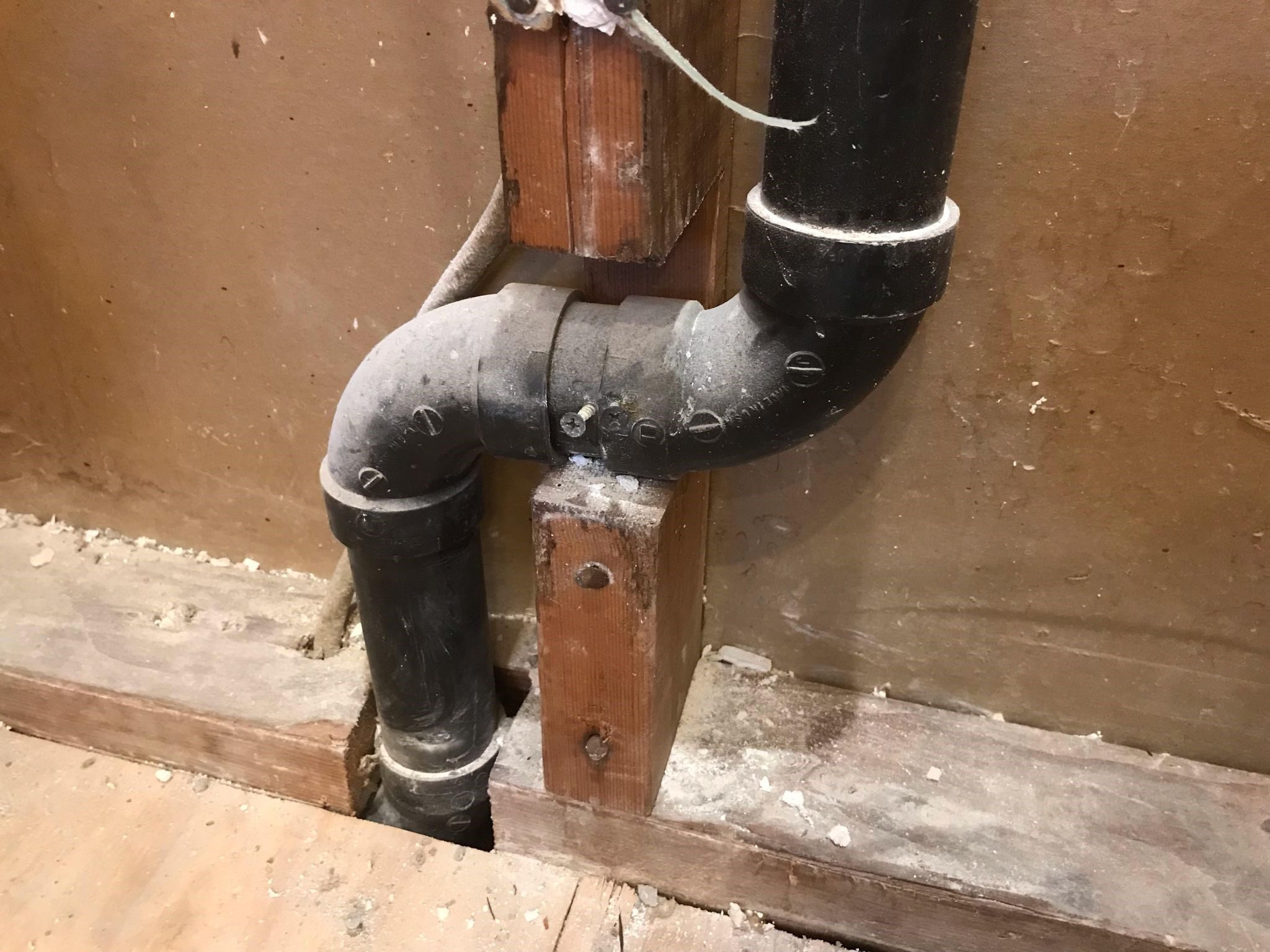 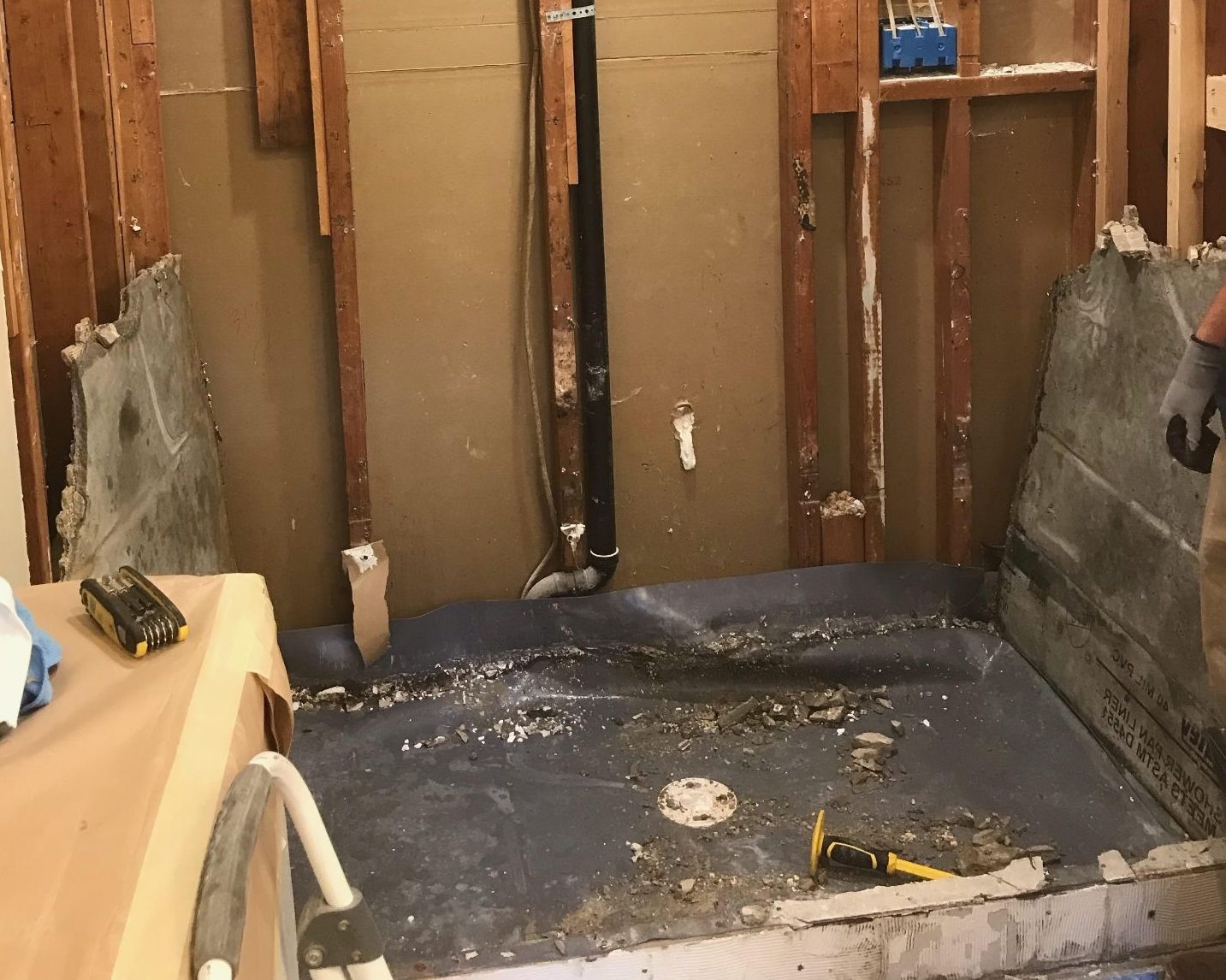 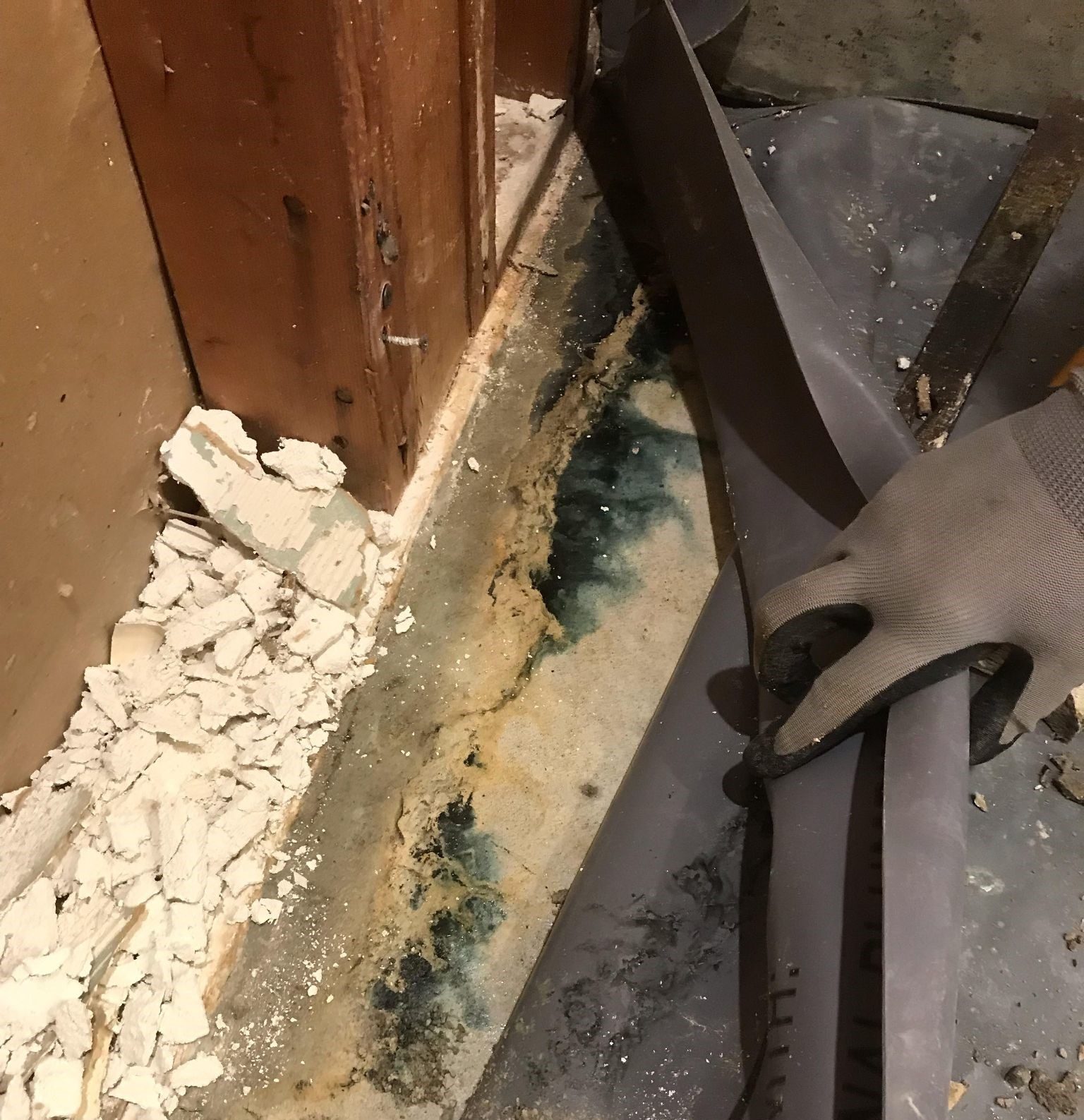 It was time to take out the shower pan. We broke through the tile and found the appropriate waterproof membrane beneath it. Unfortunately, the membrane had failed and let water through. As another layer of security, the previous builders had laid a hearty layer of concrete, but the water had found its way under that too.

The subfloor showed us two sources of water. Some water had been leaking around the drain, but the majority of the rogue water had been finding its way through about 5’ of the failed perimeter of the shower pan. The wettest corner of the subfloor was directly above the ceiling leak in the bathroom below. 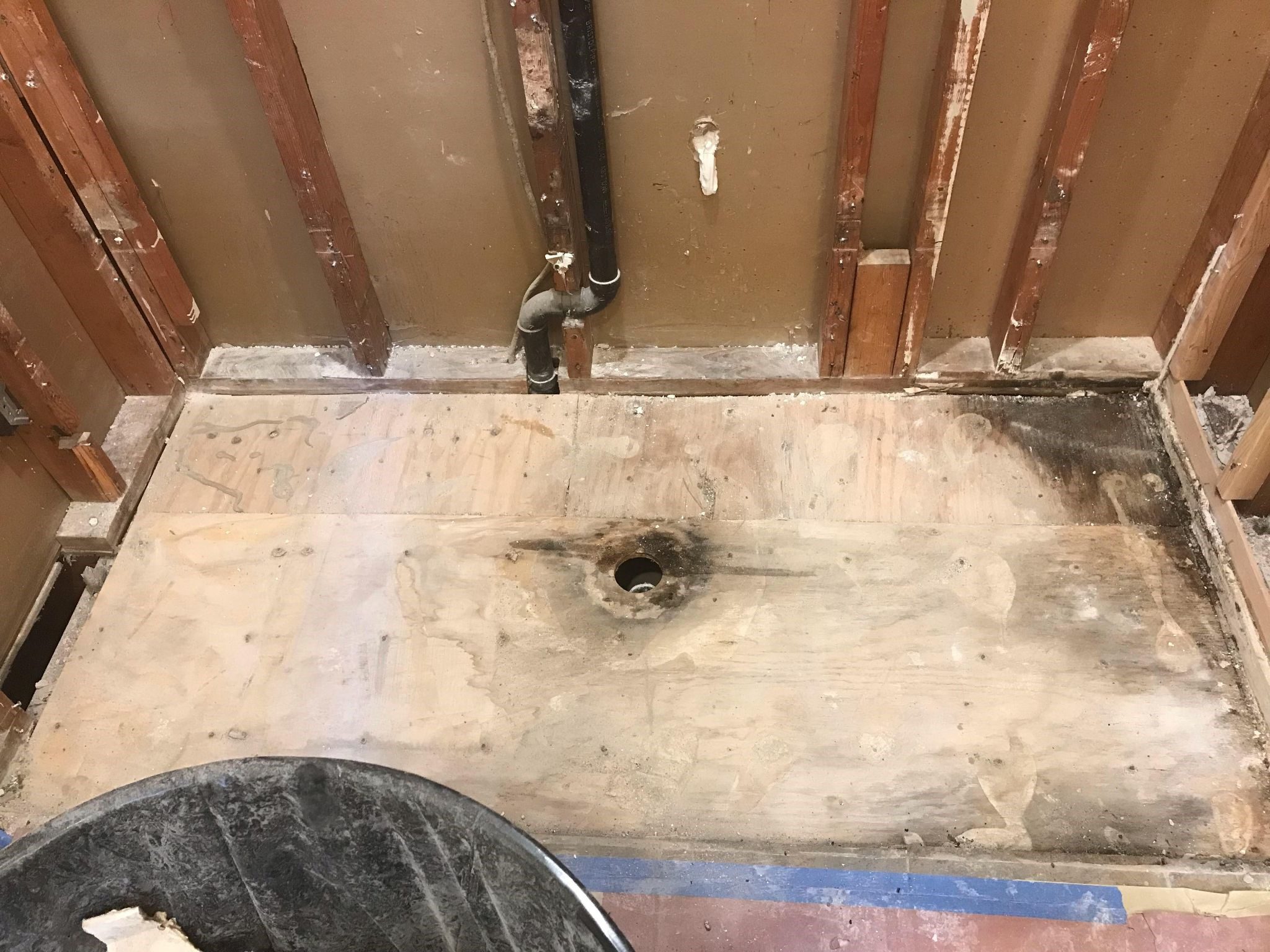 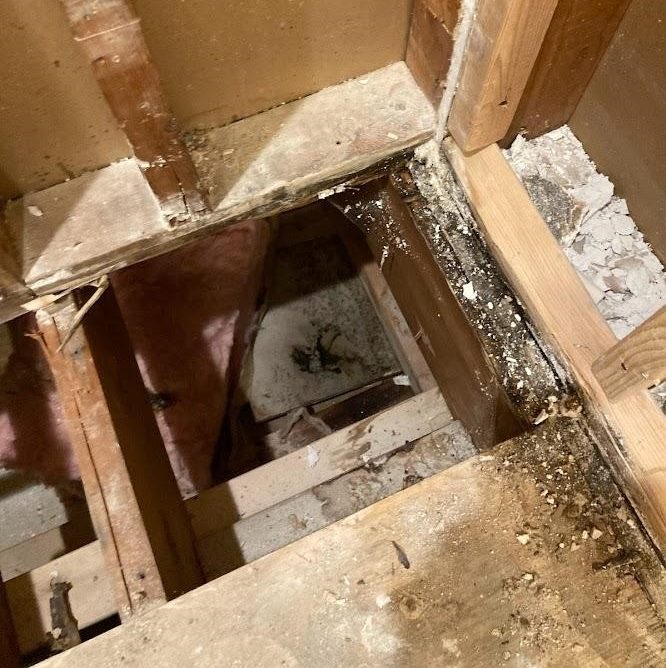 Pulling up the subfloor, we found another unexpected problem. The drain line’s p-trap keeps gas in, but also doesn’t allow air to “chase” the water down the line, hence the need for a vent pipe (see the first diagram of a sink’s p-trap) that allows air from outside to flow in and fill the vacuum left by draining water. This shower’s vent pipe had two flexible fittings and no blocking underneath, and over time the pipe had rotated in those fittings so that a section of the line had sunk lower than its connection to the drain line. Now, the vent pipe had its own “L-trap” that had filled with rainwater and was blocking outside air from the drain. The shower drain line had likely been knock-knocking as negative pressure built and forced small bursts of air through the water blocking both lines. The resulting slow drain made for more standing water in the shower pan and more opportunity for water to leak out of it. 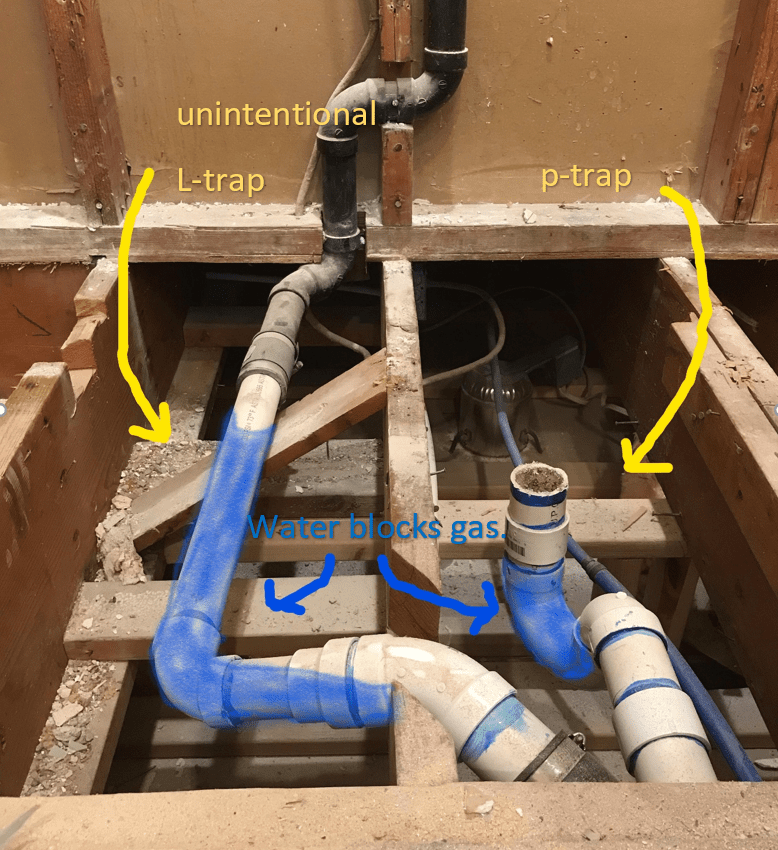 This problem was fixed simply by rotating the 90° elbow back to its proper elevation above the 45° elbow. To keep it in place, we cut a scrap 2x4 to the length of the floor joist span, inserted it under the 90° elbow, and attached each end to a joist.

With the vent pipe issues addressed, we could set the subfloor. Though only 72.5x34”, setting it involved a laser level, tape measure, and shims at 3 different points along the 6 joists it spanned. That is one level adjustment for every square foot.

On our very-level floor, we could lay the shower pan and start putting up the wall backing while plumbing the supply lines.  We pre-assembled the complex of a mixing valve, diverter, shower head, and wand hose outlet. 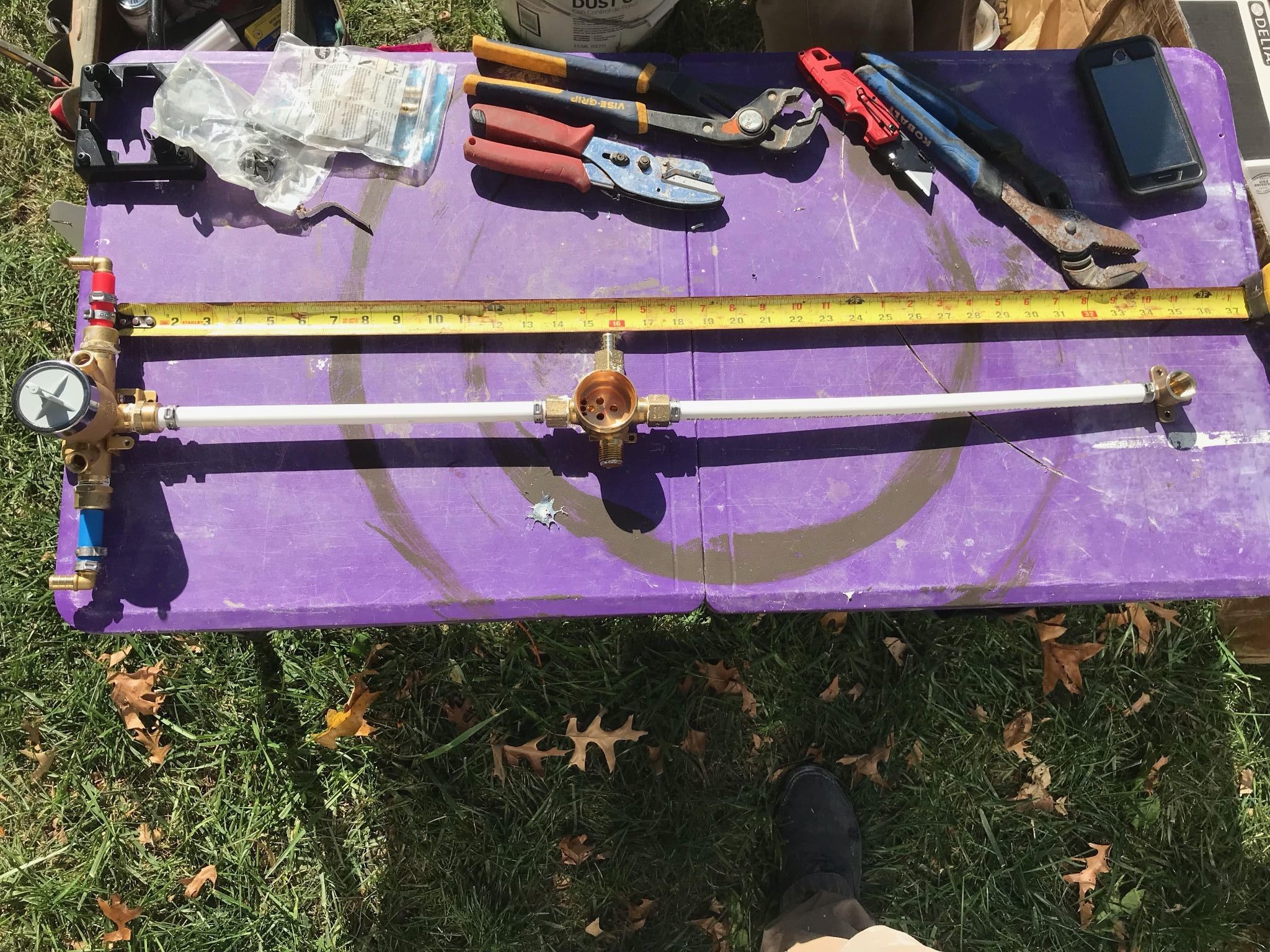 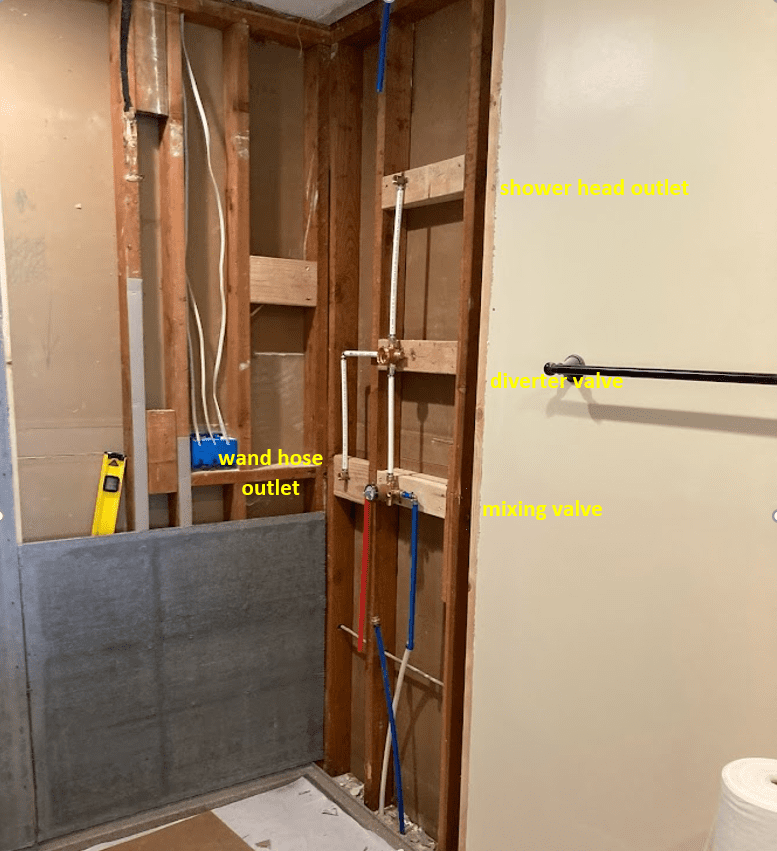 Though I thought we had made the floor very level, we brought out the laser level once again for the setting of the shower panels. The Onyx Collection, a company out of Belvue, KS, makes custom shower panels out of aluminum hydroxide (also works as an antacid, turns out) and a polyester resin. The product is durable, flexible, and close to maintenance-free. Onyx’s simple system offers very little opportunity for leaks to form, having only two unions, one cubby cutout, and the plumbing cutouts. Upkeep of the silicone sealant in those areas guarantees the surrounding walls and floors stay dry as intended. 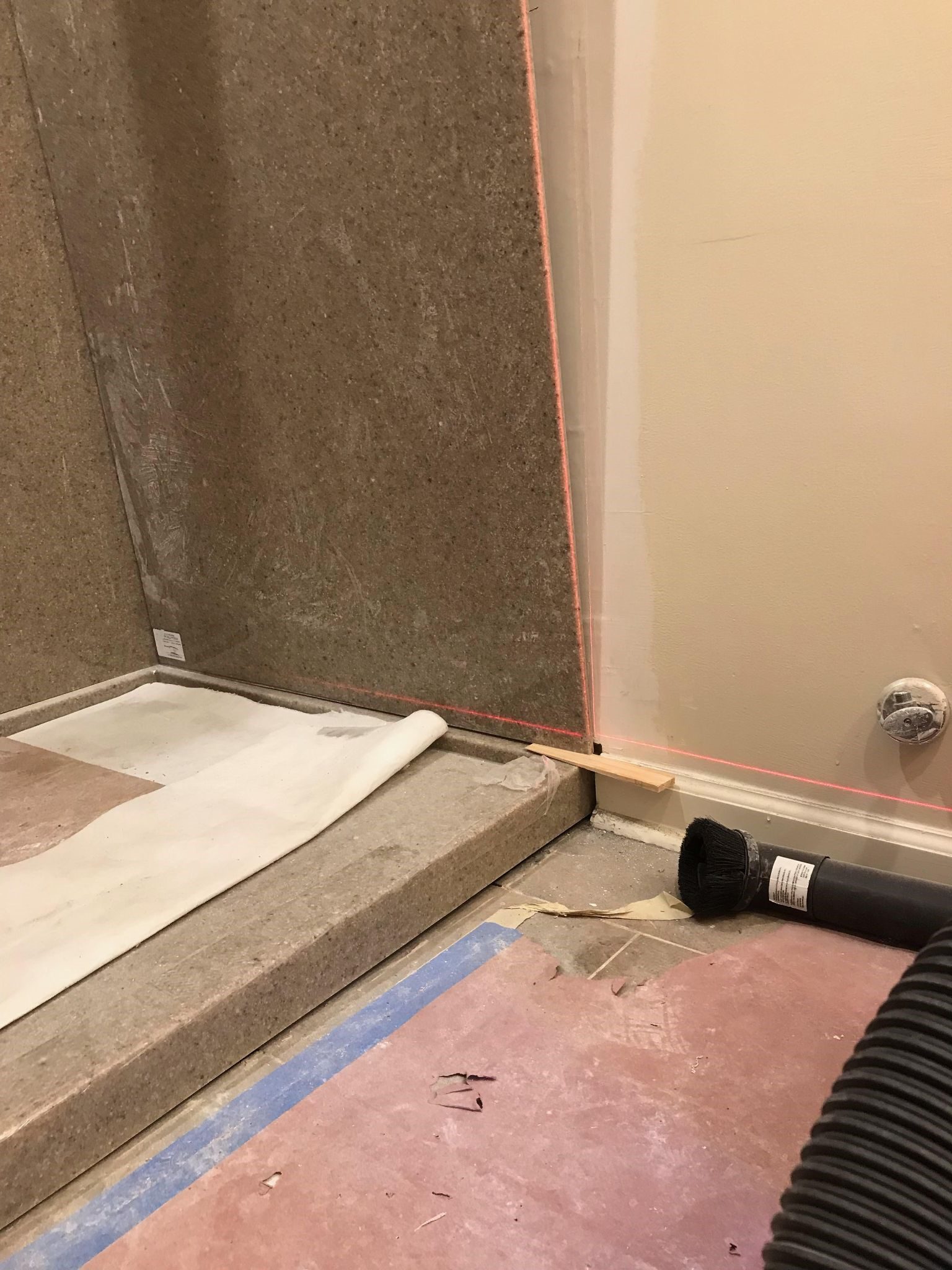 The first two wall panels went up pretty easily, just a bit of shimming on one side or the other and a good bit of silicone adhesive on the back of the panel. On the last panel, in which we needed to cut holes for the plumbing, we measured well and placed the holes perfectly. We found the shim level and proceeded to apply hundreds of silicone circles to the back of the panel. Unfortunately, the large cutout for the diverter compromised the panel and as we installed it the panel snapped in half! 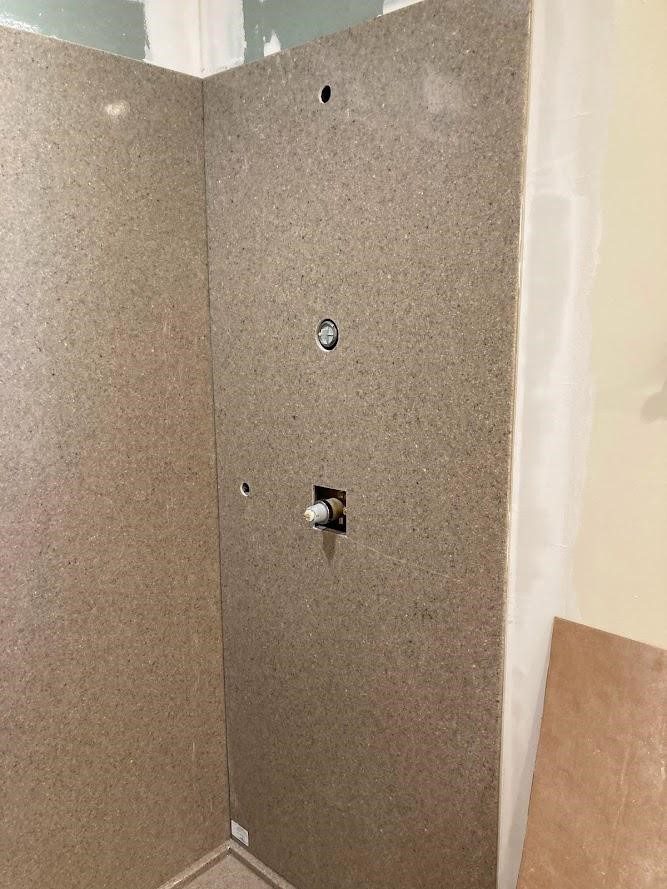 It was a stressful moment. The material cost for that one panel wasn’t particularly high, but who knew how long it might take to have it replicated? Suppliers in our industry have months of orders stacked up. We had to break the news to our client that the completion of the project would have to be pushed back for as long as it might take to obtain a replacement panel.

Fortunately, apart from failing aesthetically, the broken panel could still serve its purpose. The homeowners could use their primary bathroom while we waited for materials and scheduled the work required after their receipt.

There was still plenty to do before that point. Removing the old tile had pulled paint and drywall paper, so that needed mudding and sanding. The tile had gone to the ceiling, so in its absence was a conspicuous ½” band of untextured ceiling crowning the shower. Those repairs needed primed and painted. The shower caddies could be installed, and the plumbing features would have to be temporarily installed. After completing those tasks, we could only rely on the grace of our clients and the willingness of Onyx to prioritize our replacement panel. 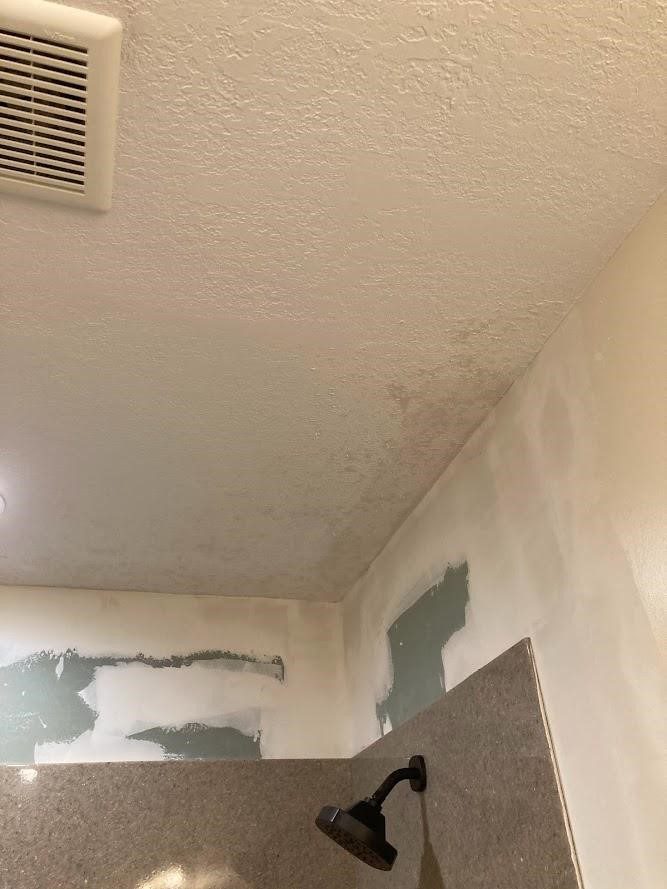 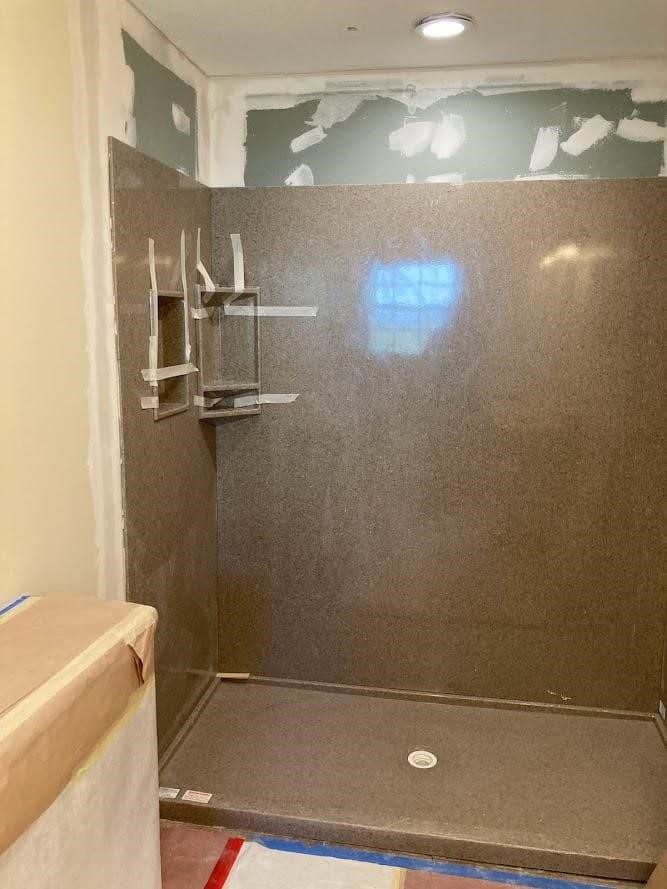 While I half expected a wait time of months, the company was able to get us a panel in two weeks. We scheduled a trip to the site to replace the broken panel and seal it in, a morning for one of our subs to install the shower door, and an afternoon for all the finishing touches and cleaning.After much anticipation, it was done. Our client, upon seeing the finished product, said down the lines of, “I know it’s weird to get emotional about a bathroom, but…” We are thankful she and her family had patience to allow us to deliver, and for our many partners who help us do so; proud to provide excellent service despite setbacks; and thrilled that she loves her new shower! 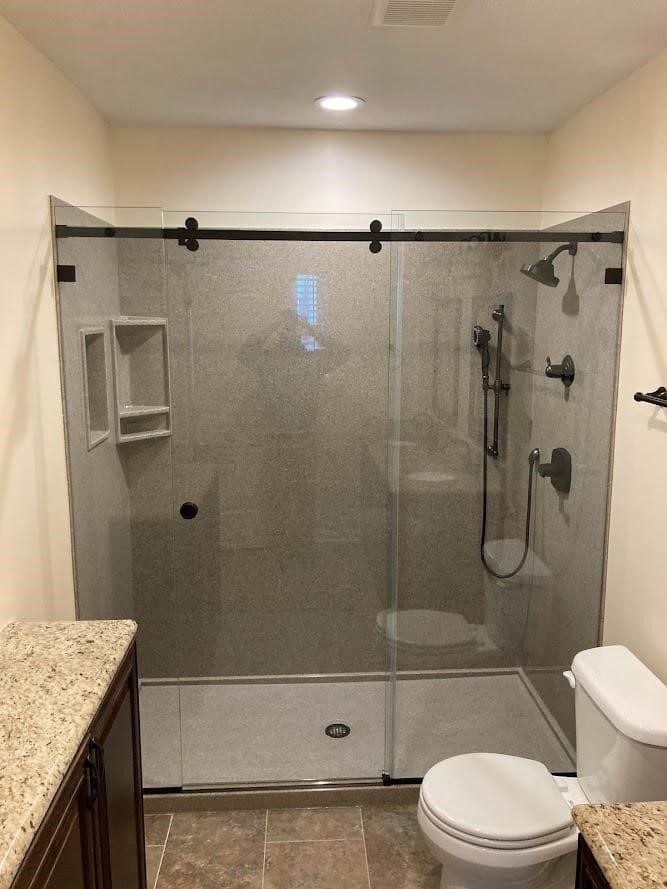